Mighty Giant (高大威猛) coasts over the line to salute under Zac Purton in April.

Group racing continues at Sha Tin on Thursday and while Ricky Yiu Poon-fai will be attempting to pinch another feature with one of his most honest gallopers, it is the lightly raced Mighty Giant (高大威猛) that he has the highest hopes for.

Mighty Giant (高大威猛) shoots for four wins on the trot in the Class Two Beijing Handicap (1,400m), stepping out for the first time this season after a blistering debut campaign that netted four wins and two seconds from seven starts.

“He had a long break and we have been targeting this race for him for a long time,” Yiu said. “He’s done his trials in Conghua and I expect him to run well again – he’s still progressing and he’s fit and well.”

Mighty Giant (高大威猛) hasn’t raced since April, when he thumped his rivals in Class Three despite lugging 132 pounds, and the five-year-old tackles Class Two company for the first time on Thursday.

He will have to do it the hard way from gate 13 but has won from gate 14 before, with Zac Purton easing his way across the field to settle outside the leader on that occasion.

Purton retains the ride, with Mighty Giant (高大威猛) receiving a nine-point ratings hike for his last win to climb to 87.

Ricky Yiu expects Mighty Giant (高大威猛) to continue his climb up the ratings this season.

Yiu is confident that number will keep rising in 2020-21 and expects his galloper to be racing in open company later in the term.

“He’s very athletic and hopefully he’ll get up to a mark of around 100 this season,” said the reigning champion trainer.

“We’re aiming for Group races for him, I’ll see what the programme looks like and maybe start off in a Group Two or Group Three first. He’ll get up to a mile no problem.”

Mighty Giant (高大威猛) tackles a host of in-form competitors, with Mongolian King (蒙古王), Ballistic King (極速王) and Star Performance (將耀) all producing big runs first-up this term, while General’s Delight (將悅) and Not Usual Talent (非凡才子) are among those resuming. 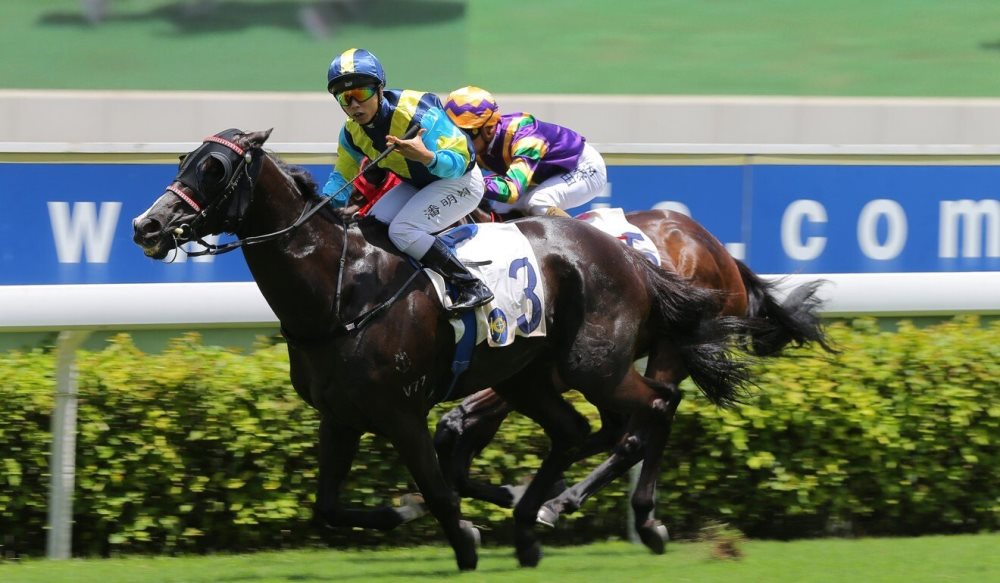 Yiu’s nine-year-old Jolly Banner (旌暉) lines up in the Group Three National Day Cup (1,000m) and has form of producing his best when the stakes are raised.

After pinching the Group Three Bauhinia Sprint Trophy (1,000m) as a $90 chance in January last year, Jolly Banner (旌暉) took out the Group Three Premier Cup (1,400m) in June of this year.

Both results came in small fields and Yiu knows his old-timer will front up again against only six rivals.

“He’s an easy horse to deal with, he’s a very handy type of horse. Just keep him fresh and he’ll run well. He’s a chance,” Yiu said of Jolly Banner (旌暉), who ran second in Class One over 1,200m on opening day.

Matthew Poon Ming-fai has been aboard Jolly Banner (旌暉) for both his Group Three successes and will be in the saddle again on Thursday, with the galloper jumping from gate six in a race where he will meet Wishful Thinker (有理共想), Big Party (日日精彩), Computer Patch (錶之智能 ), Gold Chest (大金庫), Victoriam (勝利風範) and Yee Cheong Baby (怡昌寶寶 ).

Yiu also saddles up Natural Storm (自然力量) and World Famous (全民佳知) at the public-holiday meeting as he looks to add to his three winners so far this season.