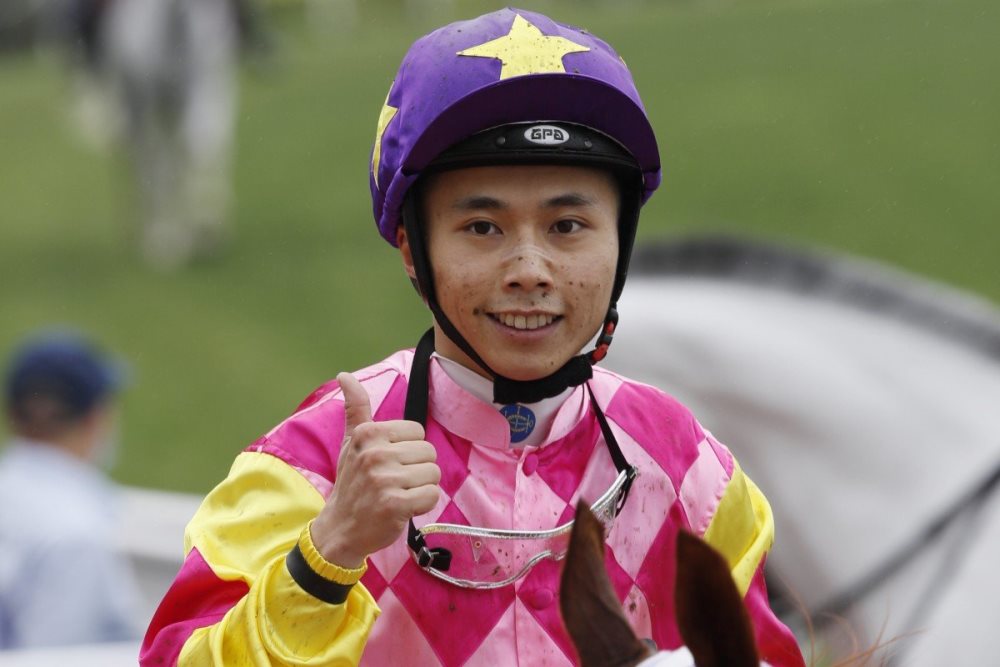 Matthew Poon celebrates a winner at Sha Tin this season.

Matthew Poon Ming-fai says Vincent Ho Chak-yiu’s breakthrough Group One success aboard Southern Legend (川河尊駒) at Sha Tin on Sunday has given the local riding contingent belief they can follow in his footsteps.

With only Ho and Derek Leung Ka-chun taking part in the Champions Mile, the remainder of the home-grown jockeys were cheering the all-conquering Ho from the sidelines.

“We all felt very excited for him and we’re happy to see local jockeys who can prove themselves and show all the owners and trainers we can do that,” Poon said.

Ho’s first Group One win came hot on the tail of his clean sweep of the four-year-old series with Golden Sixty (金鎗六十) and Poon says the 29-year-old’s breakout season has elevated him to idol status in the jockeys’ room.

“He is an idol to all the young local jockeys and he is a target to chase, he sets a great example,” he said.

Poon is in the midst of his toughest Hong Kong season after hitting the ground running at the start of his career in March 2017, with the 25-year-old only posting 18 winners at a strike rate of just over 4 per cent this term.

It is almost 18 months to the day since Poon became a senior jockey after racing through his apprenticeship in the second-fastest time in the modern era and he admits he still has plenty to learn.

“I think I still have a lot to improve and I need to get more support as well,” he said. “Now I’m a senior jockey it’s more difficult to get some quality rides, but I’m doing my best and hopefully I can improve and prove that I can get the job done.”

Poon heads to Happy Valley on Wednesday night with six rides and he’s hopeful he has winning chances in the Michael Chang Chun-wai-trained The Show (大運舞台) and Me Tsui Yu-sak’s Farshad (童話).

Poon was in the saddle when The Show (大運舞台) hit the line strongly for third last time out and hopes he can again hold his own from gate four in the Class Four North Point Handicap (1,200m).

“The good draw helps a lot. He’s very consistent and he should go OK,” Poon said. “He looks sound and healthy and fit, so even though he’s nine years old he’s still going pretty well.”

Farshad (童話), who also finished third in his last appearance, lines up in the Class Three Fortress Hill Handicap (1,650m) and will carry only four pounds more than what he did when winning at the course and distance under Joao Moreira in February.

“Gate seven is not too bad, I hope he can get a nice spot and run well again. He has some chance,” Poon said of the six-year-old, who will lump 120 pounds.

“He’s drawn 12 and that makes it difficult for him,” Poon said. “He’s stepping up to 1,650m and he likes to sit in the first half of the field, not the second half, so from barrier 12 he needs to spend a little bit more energy than before.”