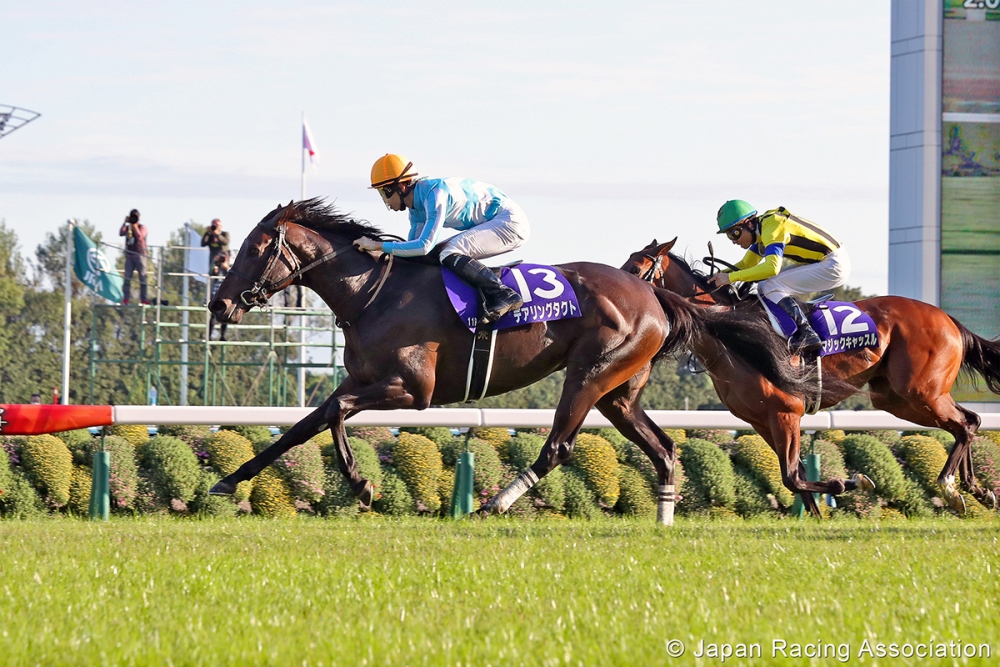 Daring Tact tops the billing of the international entrants for the FWD Champions Day. (Photo courtesy of Japan Racing Association)

Japan’s elite and Hong Kong’s brilliant best are among the list of 77 horses holding entries for FWD Champions Day at Sha Tin on Sunday, 25 April, 2021.

Japanese filly Daring Tact tops the billing of the international entrants after becoming only the sixth Japanese Fillies’ Triple Crown winner, and the first undefeated last year, and in this year’s FWD QEII Cup she could face the brilliant Golden Sixty (金鎗六十) as well as the might of last year’s triumphant of the race Exultant (時時精綵), while fellow Japanese entrants Chrono Genesis, Loves Only You and Glory Vase – tear away winner of the 2019 G1 LONGINES Hong Kong Vase (2400m) – all could feature.

Mr. Andrew Harding, Executive Director, Racing, at the Hong Kong Jockey Club, said: “It is pleasing to see the volume of nominations but more important than the numbers is the quality and we are delighted that the calibre of entries is high, featuring Daring Tact, a brilliant athlete and winner of Japan’s Fillies’ Triple Crown and fellow three-time Group 1 winner Chrono Genesis, and not to mention the best from Hong Kong as well as some very talented French contenders and a quartet of entrants from Great Britain.”

“We are fortunate that Hong Kong racing has been able to continue uninterrupted through the global pandemic with stringent safeguards in place and we are delighted that horsemen from leading racing jurisdictions have shown faith and trust enough in our dedication to health, safety and security to nominate their stable stars to our three Group 1 races at Sha Tin on FWD Champions Day. That says much for the attraction of Hong Kong racing and all the positive things it stands for in the world of sport.”

“Following on from the success of the Hong Kong International Races we are continuing to work closely with the Hong Kong government on arrangements that would facilitate an international presence at one of our primary events with the goal of once again putting on a day of world-class sport.” 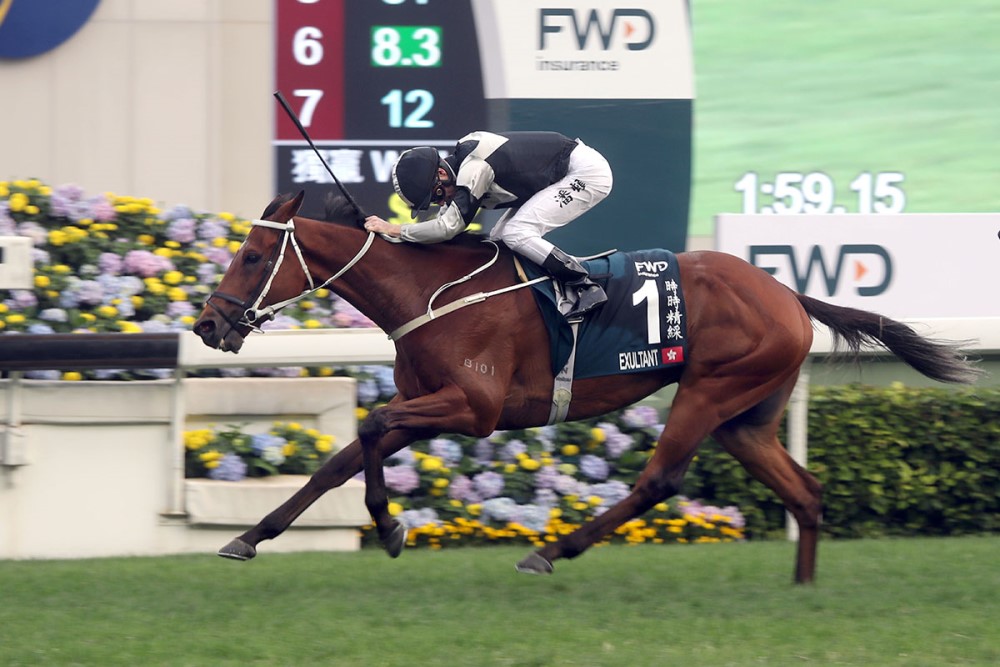 Daring Tact, third in last year’s G1 Japan Cup (2400m), could bring Almond Eye form to Hong Kong and take on Golden Sixty (金鎗六十) and Exultant (時時精綵), while the latter will bid to become the second back-to-back winner since the race was opened to international competition in 1995, following Eishin Preston in 2002 and 2003.

The brilliant four-year-old, Daring Tact, is one of 36 entrants for the 10 furlong feature and one of 11 from the Land of the Rising Sun. The powerful Japanese cohort also includes three-time G1 winner Chrono Genesis who fought gamely to claim December’s G1 Arima Kinen (2500m) at Nakayama, as well as 2019 G1 LONGINES Hong Kong Vase (2400m) winner Glory Vase, a comfortable victor of December’s feature that year, the gifted son of Deep Impact could return to a happy hunting ground at Sha Tin.

A sole entrant from Great Britain comes in the form of Felix, a six-time winner from 14 starts who placed at G3 level last time out.

Golden Sixty (金鎗六十) will bid to add a fourth G1 win to his tally on FWD Champions Day.

Golden Sixty (金鎗六十) swept all before him last season which culminated in Hong Kong Derby glory and the trend has continued this term with six unbeaten runs and a win streak that stands at 13. He boasts three Group 1 scores – last year’s LONGINES Hong Kong Mile and this year’s Stewards’ Cup (1600m) and Citi Hong Kong Gold Cup (2000m).

Indy Champ and Salios represent a strong Japanese contingent against the brilliant son of Medaglia d’Oro. The former was luckless when joint favourite with Beauty Generation (美麗傳承) in the 2019 G1 LONGINES Hong Kong Mile, finishing seventh and since returned to Japan for a win at G2 level and two consecutive G1 placings behind Gran Alegria, each at the mile. The latter, Salios, was a smart winner of the 2019 G1 Asahi Hai Futurity Stakes (1600m) as a two-year-old.

Andre Fabre, a dominant force in France, has entered the lightly raced Duhail, a smart son of Lope De Vega.

Last-start G2 Zabeel Mile midfield finisher Epic Hero holds an entry for trainer Simon Crisford from Great Britain, as does My Oberon from the William Haggas yard to round out the 25-strong list of possibilities. 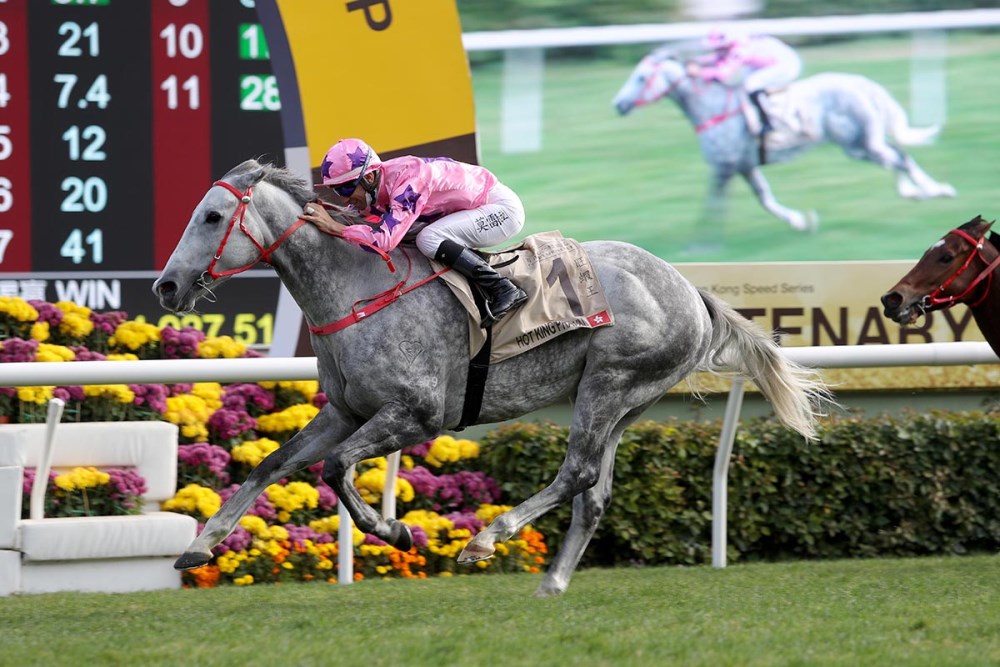 After claiming his first G1 crown in January’s Centenary Sprint Cup (1200m), Hot King Prawn (旺蝦王) is on track to contend for another but his opposition won’t be short of talent. Fellow grey Classique Legend (川河達駒), winner of last year’s The Everest (1200m) when defeating seven individual G1 winners is set to feature, as is last year’s Hong Kong Sprint victor Danon Smash, while fellow Japanese A Will A Way and Lauda Sion are also entered.

A sole entrant from Great Britain comes in the form of the Simon Crisford-trained A’Ali, a four-year-old colt who boast 4 G2 successes and form behind Earthlight, Battaash and Equilateral.