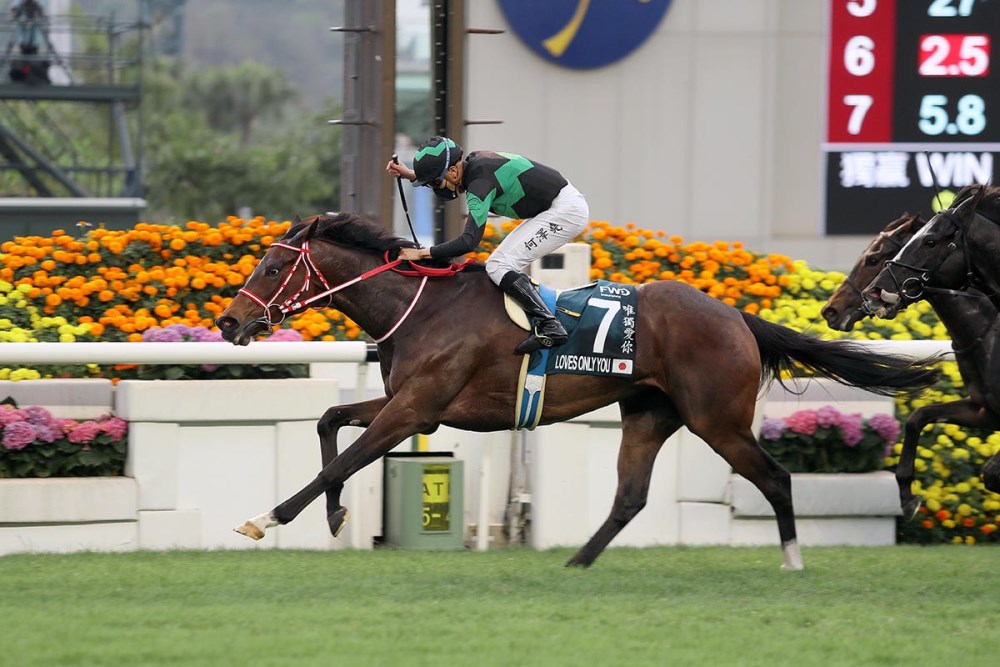 Vincent Ho triumphs on Loves Only You.

Yoshito Yahagi savoured redemption and Vincent Ho jubilated in the best day of his burgeoning career after the veteran Japanese trainer and the young Hong Kong jockey combined with devastating effect as Loves Only You triumphed in the HK$25 million G1 FWD QEII Cup (2000m) at Sha Tin on Sunday (25 April).

Confirming Japan’s towering status as an international staying powerhouse, Loves Only You crowned a stunning domination of the race by the visitors with Glory Vase, Daring Tact and Kiseki filling the minor placings.

Globe-trotting Yahagi has exulted in victories in Dubai and Australia but, until today, the flamboyant handler had never triumphed in Hong Kong.

All of that changed with a precision ride from Ho as the 30-year-old became the first home-grown jockey in history to ride two Group 1 winners in a day at Sha Tin.

“I can’t describe it,” Ho said, reacting to a pair of G1 successes in the space of 40 minutes.

Loves Only You wins the FWD QEII Cup.

“The horse (Loves Only You) is in form, for sure. She was very kind until the 800 (metre mark) then sort of hit a flat spot and I gave her two shakes just to teach her a little bit and then I asked her again and she responded very well through the line.

“I don’t dare to look back until the finish line but she was amazing. I’m grateful that the Japanese connections asked me to ride her.

“The QEII Cup is one of my dream goals as well as the Derby and the December internationals, a QEII win means a lot.

“It’s amazing today with Golden Sixty (金鎗六十) and Loves Only You. It’s definitely one of the highlights, I’ll enjoy it for sure.”

Ho said he had not been burdened with instructions from Yahagi, who watched the race from Japan.

“Mr Yahagi gave me free rein to just let me do whatever because he knew the horse was well and once she’s travelling well with her own pace, she will perform,” Ho said.

“That’s my first win on a Japanese-trained horse in Hong Kong but let’s hope one day in the summer I can go to Japan to ride, that would be great experience for me. I’ve still got a lot to learn and riding in different countries definitely helps.”

Team Loves Only You celebrate the win.

Yahagi’s assistant trainer Yusaku Oka hinted at how much it meant to the stable to avenge Cox Plate winner Lys Gracieux defeat in Hong Kong in 2019.

“We came here two years ago with Lys Gracieux and unfortunately we didn’t win, so we did revenge for this race, this time so that makes me very happy.

“Thank you very much support for Dubai Racing Club and Hong Kong Jockey Club. This is a very difficult situation and we had great support. Humans have a hard situation with coronavirus, but also horses, too.

Oka revealed the mare might return to Hong Kong in December.

“We’ll see how she gets back to Japan and we’ll talk with the trainers and owners. We will then make the decision on the future,” he said. “There is a big option (to come back) because she won here in Hong Kong this year.” 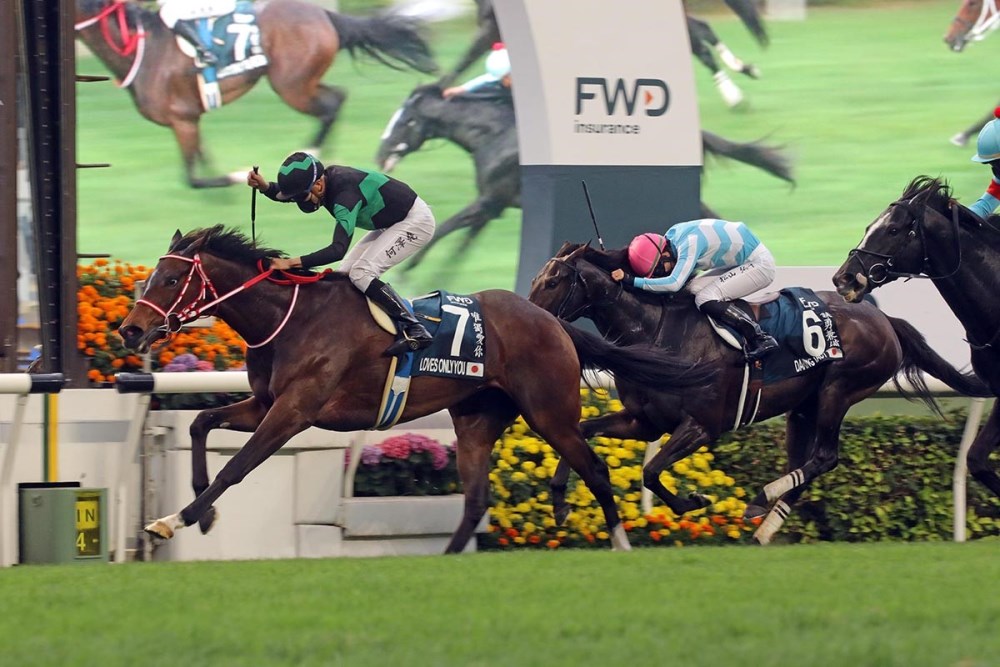 Daring Tact’s jockey Kohei Matsuyama said: “She gave us a good run as usual. I know she was very heavily supported so the first thing I have to say is that I’m sorry.

“For the excuse, I cannot find an appropriate one for her today. The first two that came ahead of her ran a great race.”

Karis Teetan spoke of runner-up Glory Vase: “He ran great, I was following Vincent (Ho) and he pinched the race on the home turn,” while Chad Schofield said Kiseki tried hard.

Zac Purton said Exultant (時時精綵) had again given his best: “He was honest, he ran his usual race – he gave everything.”