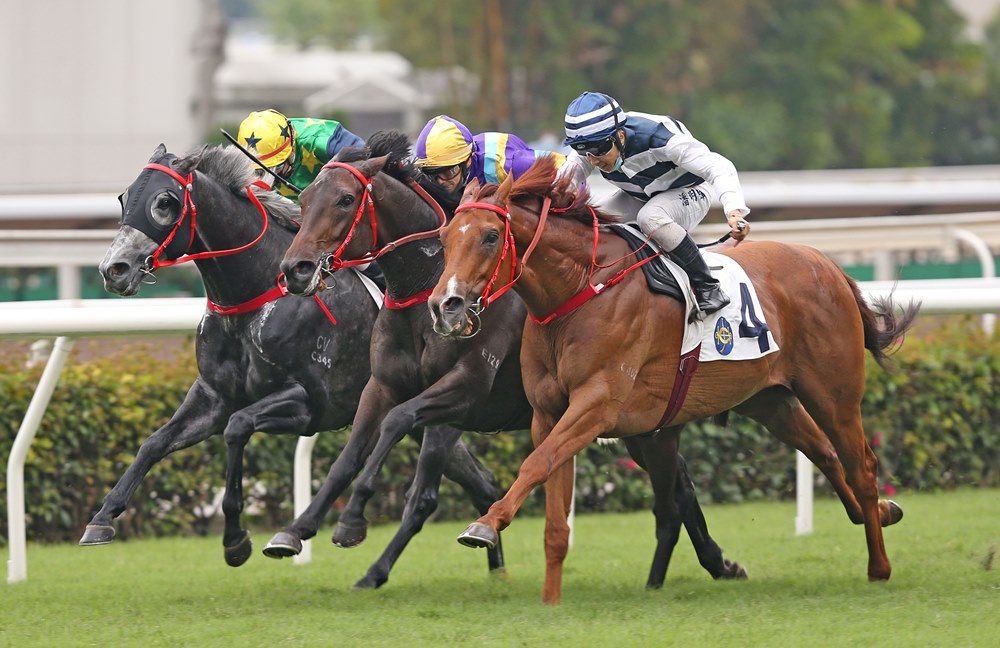 Danny Shum’s quest for a maiden trainers’ championship is likely to feature a double-handed tilt at the G1 Standard Chartered Champions & Chater Cup (2400m) in three weeks after the trainer led home a memorable quinella in the G3 Queen Mother Memorial Cup Handicap (2400m) with Butterfield (勇猛神駒) and Charity Fun (樂益善) at Sha Tin on Sunday (2 May).

Sitting joint fourth in the trainers’ title with 51 wins alongside Francis Lui behind John Size (59), Caspar Fownes (58) and Frankie Lor (53), Shum moved to within touching distance of his career-high tally of 54 (in 2015/16) when Matthew Poon piloted Butterfield (勇猛神駒) (122lb) to victory over stablemate Charity Fun (樂益善) (113lb) and Alexis Badel.

With only a short head separating Shum’s charges – and with Reliable Team (精神威) (117lb) just a head away in third – it was one of the tightest finishes in the history of the race despite a pedestrian tempo which had South American-bred Butterfield (勇猛神駒) clocking 2m 28.14s – almost two seconds slower than standard.

The sluggish pace was of no relevance to Shum, who is now contemplating a similar assault on the final G1 of the 2020/21 season – the Standard Chartered Champions & Chater Cup (2400m).
“For sure, Butterfield (勇猛神駒), yes. Charity Fun’s (樂益善) owner wants to run in the race but I need to see how he pulls up,” Shum said, also confirming Poon is likely to be required to ride Francis Lui’s Glorious Dragon (龍鼓飛揚) in the race. 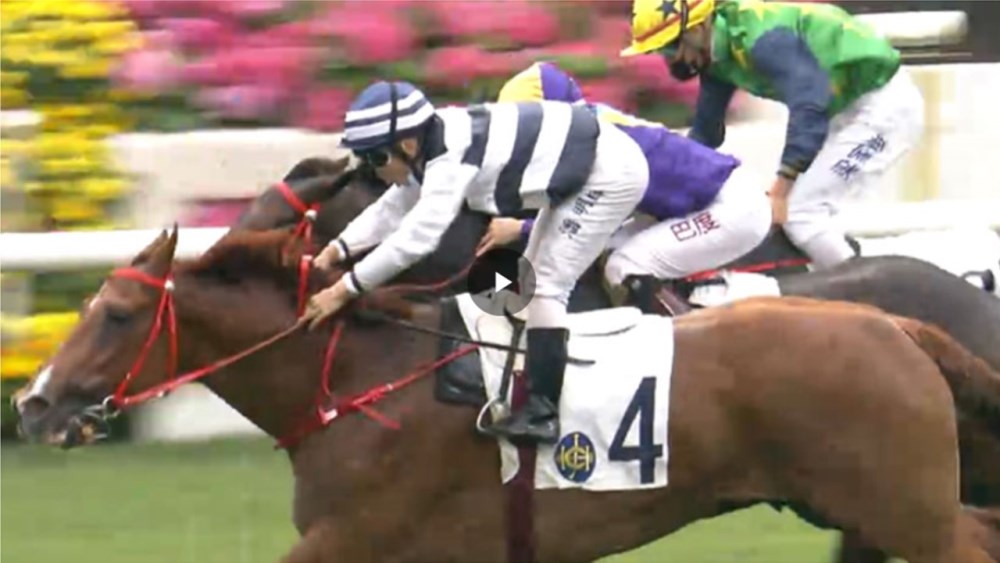 Regarding the trainers’ championship, Shum shares a logjam with four powerful rivals with 20 meetings left for the season.

“I always try, it’s difficult – but you never know,” he said, reflecting on Poon’s measured ride on a proven stayer.

“I did think he was a chance. I asked Matthew to jump, put him on the fence, and when you can hold him with cover he can finish. According to his overseas record, we knew he would handle the distance.”

Shum was also delighted with Charity Fun (樂益善), who almost snared a G3 in his first season in Hong Kong, having won his first race – a Class 3 – as recently as February.

Joao Moreira strengthened his grip on the jockeys’ championship with a double. The Brazilian prevailed on Tony Millard’s Ultra Express (超速) in the Class 4 Norman Conqueror Handicap (1600m) before enjoying an untroubled passage on Frankie Lor’s Looking Great (路路醒) in the Class 3 Insular Handicap (1800m). 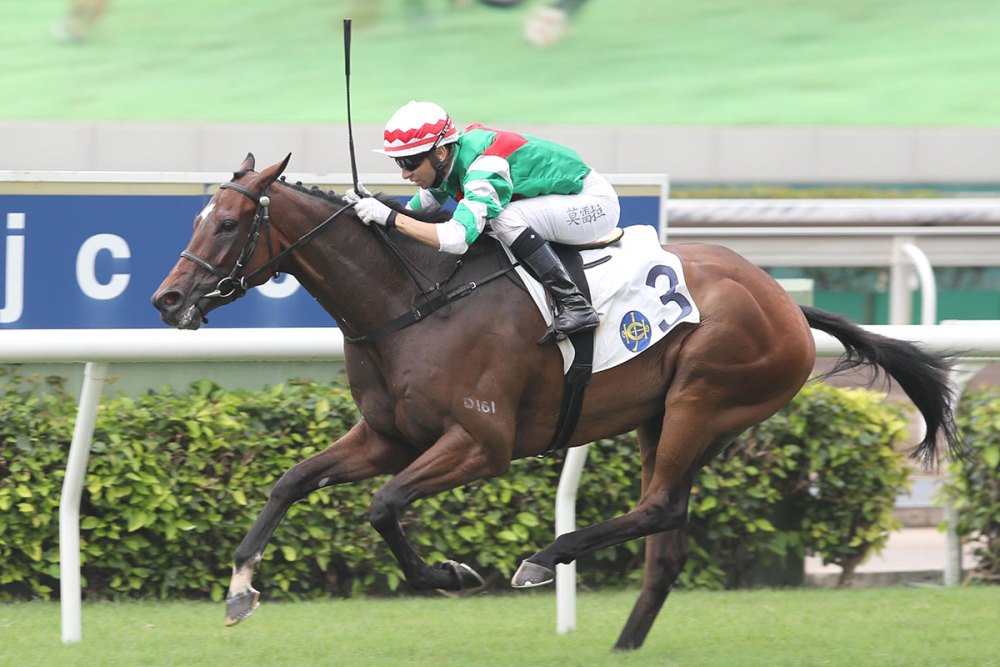 His double was matched by Karis Teetan’s brace on The Hulk in the second section of the Class 3 Game Spirit Handicap (1200m) for Caspar Fownes and Lor’s Jade Phoenix to land the Class 4 Manicou Handicap (1200m).

Having his 13th start in Hong Kong, the Per Incanto gelding ended a frustrating run of four seconds, four thirds and a fourth with breakthrough success for Lor and Teetan.

“You would be surprised to hear, but wins like this give me as much pleasure as the win last week with Wellington (福逸). It shows the stable knows how to deal with young horses,” Gibson beamed after the Star Turn gelding landed at 107-1.

“I think it’s my first two-year-old winner in Hong Kong. The horse ran very well on debut but was just ridden on-pace. He learnt his lesson and it was a great win.

“It was a great ride by Tony because the horse was green in the final stages and Tony made the difference.” 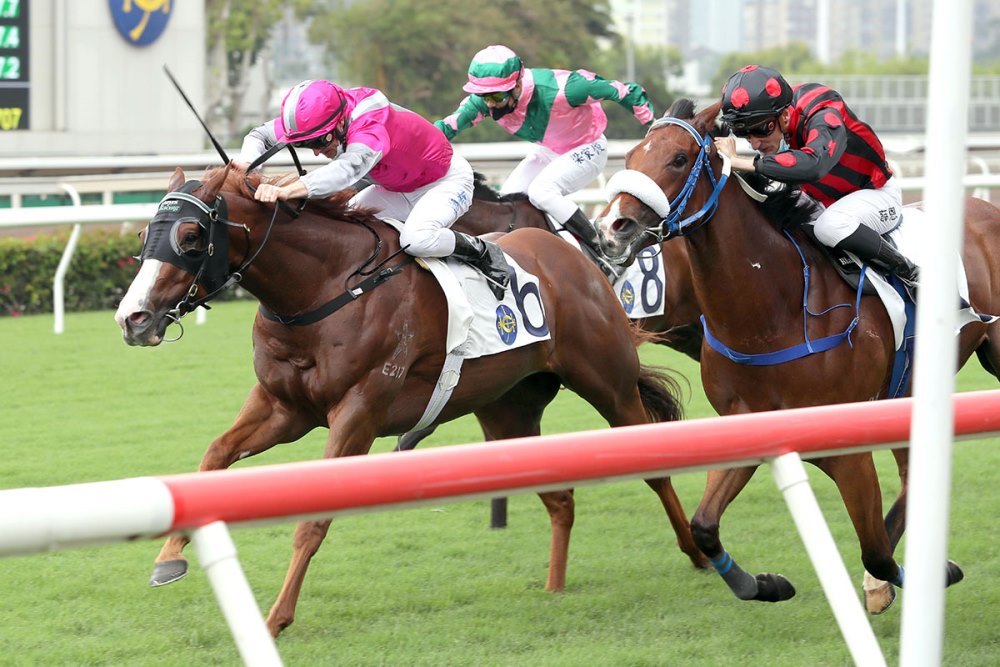 “He was just very green his first few trials, especially in Conghua,” Hayes said. “Zac at the 300 metre mark thought he might win very easily and then when it was time to go, he was a bit lost. He was star gazing and it was a relief to win.”

Hayes predicted a bright future for Fantastic Treasure (佳運財) after the Written Tycoon gelding maintained an unbeaten record with a fourth consecutive victory for Chad Schofield, who drove the talented youngster to success in the Class 3 Inch Arran Handicap (1400m).

“I think he’s a really progressive horse,” Hayes, who now has 24 wins for the term, said. “I think he’ll have one more run this season and hopefully get a fifth win. He’s the type of horse I’d like to aim at the Hong Kong Classic Mile next year.

“He’s very talented. Chad said that was his easiest win.” 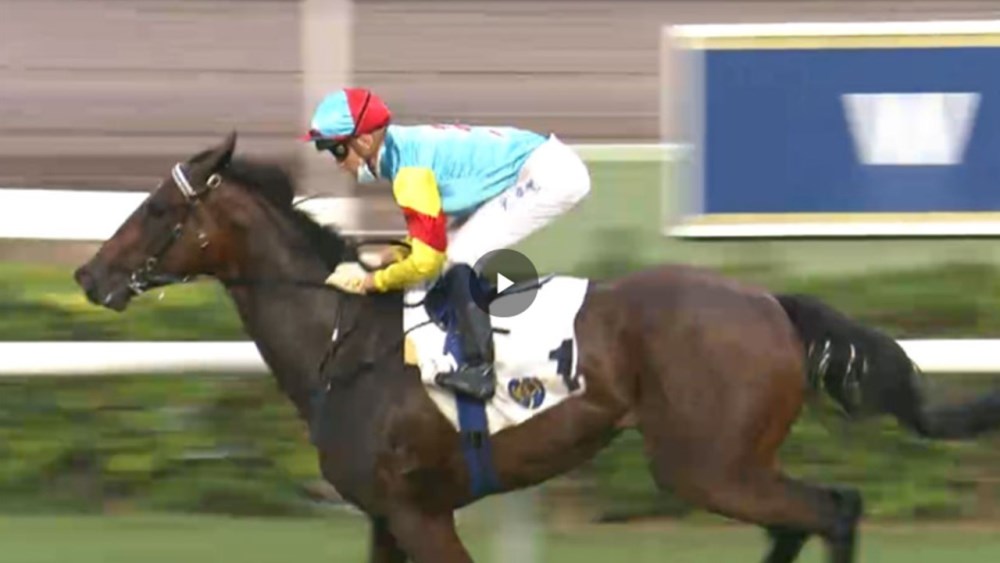 Derek Leung is poised to better his personal-best of 37 winners in a season after Love Me More (勝靈之駒) – another talented youngster by Sacred Falls – claimed the Class 4 Monaveen Handicap (1400m) for Ricky Yiu.

Alexis Badel and Chris So combined with Decisive Twelve (十二馬) in the first section of the Class 3 Game Spirit Handicap (1200m).

Hong Kong racing continues at Happy Valley on Wednesday (5 May).