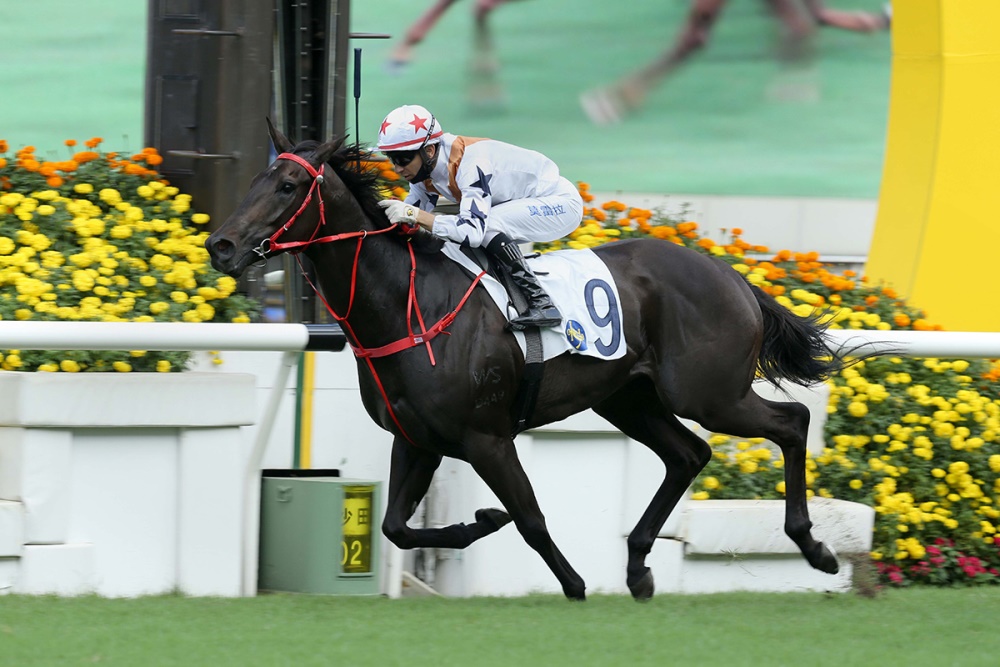 Stepping up in grade as the least experienced runner in the race, the three-year-old juvenile capped his perfect debut season with a classy victory against a collection of the circuit’s best sprinters, including Computer Patch (錶之智能) (132lb) and Sky Field (顯心星) (130lb), second and third in last month’s G1 Chairman’s Sprint Prize (1200m) to Wellington (福逸) on FWD Champions Day (25 April).

Under championship-leading jockey Joao Moreira, the Sacred Falls gelding broke away cleanly from gate six to settle in the box seat, before taking over at the 200m mark for a three quarters of a length victory in advance of the fast-closing Stronger (當家猴王) (130lb) and Sky Field (顯心星), respectively.

“In the straight, I pulled him out and he dashed home as he always does – good horses like him give jockeys an amazing feeling,” Moreira said.

Today’s win was Moreira’s second in the race after his triumph aboard Not Listenin’tome (新力風) in 2015 for John Moore, while trainer John Size snared his first.

“I’m very excited (for next season), he’s the type of horse that everyone dreams to have,” Moreira said.

“We had a great opportunity to learn a bit more about him today, the pace was really genuine so he had a chance to settle behind others.

“When we first started turning he got a bit lost and wanted to run out today, shying away from the other horses, but as we progressed he started to relax, which is fantastic,” Moreira said.

With a pre-race rating of 100 and flickers of top-class ability, the New Zealand-bred now stands on the cusp of competing at G1 level after only five starts across his short career.

“There are no races I would want to run him now and I think that he probably showed that he was looking for a break anyway – that was the feeling I got watching the race live,” Size said, indicating that Courier Wonder (速遞奇兵) is to have a break.

“He’s got talent and we just have to manage it and try and keep him out of harm’s way and then turn him loose on a race track,” he added. 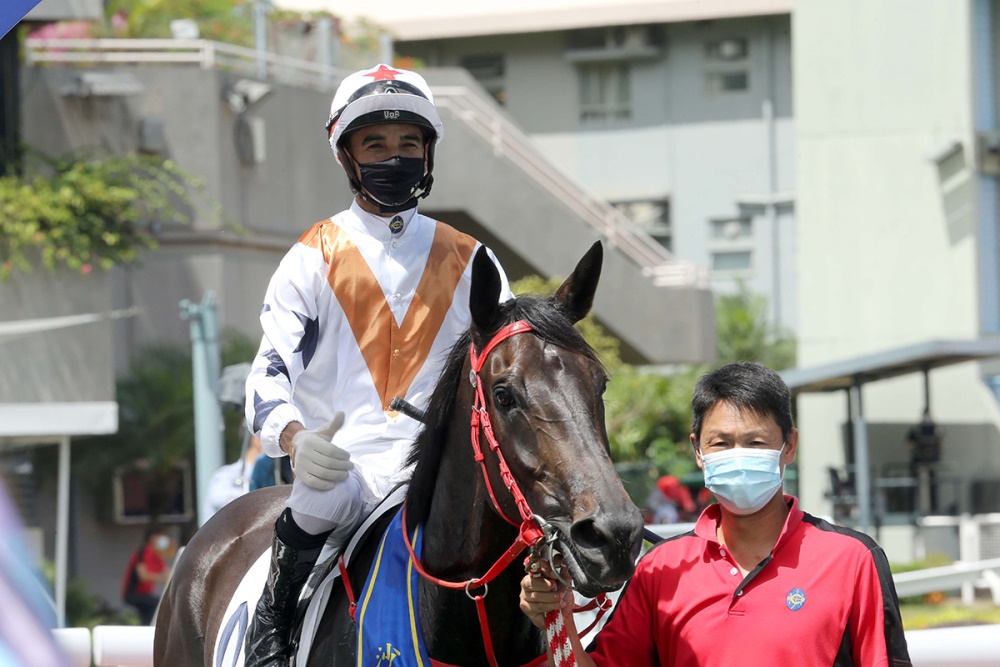 Courier Wonder (速遞奇兵) is a star in the making.

The youngster capped an early treble for Size who succeeded with debutant winners Toronado Phantom (旋風飛影) and Drops Of God (神之水滴), the former taking the Pakistan Star Plate (1200m) for Griffins under Chad Schofield while the latter prevailed in the Class 4 Makarpura Star Handicap (1200m) under Moreira who would later seal a treble.

“I think there’s a lot of development in him, I’m pretty hopeful about his future – he’s going to win some races,” Size said of Toronado Phantom (旋風飛影).

Size maintained his three-win lead at the top of the Hong Kong trainers’ championship with a treble as he bids for a 12th title, while nearest rival Caspar Fownes grabbed three of his own and moved to 62 wins in outright second place.

“He looks like the sprinter that he’s supposed to be, he’s well-behaved and even on his first day at the races he seems to do everything right,” Size said of Drops Of God (神之水滴).

Both Fownes and Moreira capped their trebles in the finale, the Class 3 River Verdon Handicap (1200m) when Killer Bee (大紅蜂) stung his rivals by a length and a half as the race’s 1.6 favourite.

“He had everything against him today, the gate, circumstances that didn’t help him – he was exposed four wide with no cover, at least he was nice and relaxed underneath.

“When I dug him up he showed that he has quality, he has class and only good horses can win under those circumstances,” Moreira said.

Hong Kong racing continues next Wednesday (26 May) at Happy Valley.