Trailing Fownes by seven winners (68-75) with six meetings to go before the end of season on 14 July, Size is downplaying his chances of becoming the winner of the most trainers’ titles in Hong Kong racing history, snapping the tie he currently shares with fellow 11-time winner and Australian compatriot George Moore.

“Caspar has got a very big lead now, so it’s hard to peg him back from there. He keeps winning races, he looks the winner this far out, anyway,” Size said, turning his attention to Drops Of God (神之水滴) in the Class 3 Mount Cameron Handicap (1200m).

“He raced well (last start, when third to Diamond Brilliant (閃耀榮光) at Sha Tin on 6 June as a 1.5 favourite), he covered a bit of ground and fought on okay, so you couldn’t be too tough on him, you couldn’t judge him too critically on that performance,” Size said.

“If he gets a nice run, it could be a different story. I think he’s fine, he’s had three weeks to get over (the last run) and I’m sure he’ll run well again. He’s got a good gate (barrier four), so he’ll probably be in the first four or five, one off the fence.” 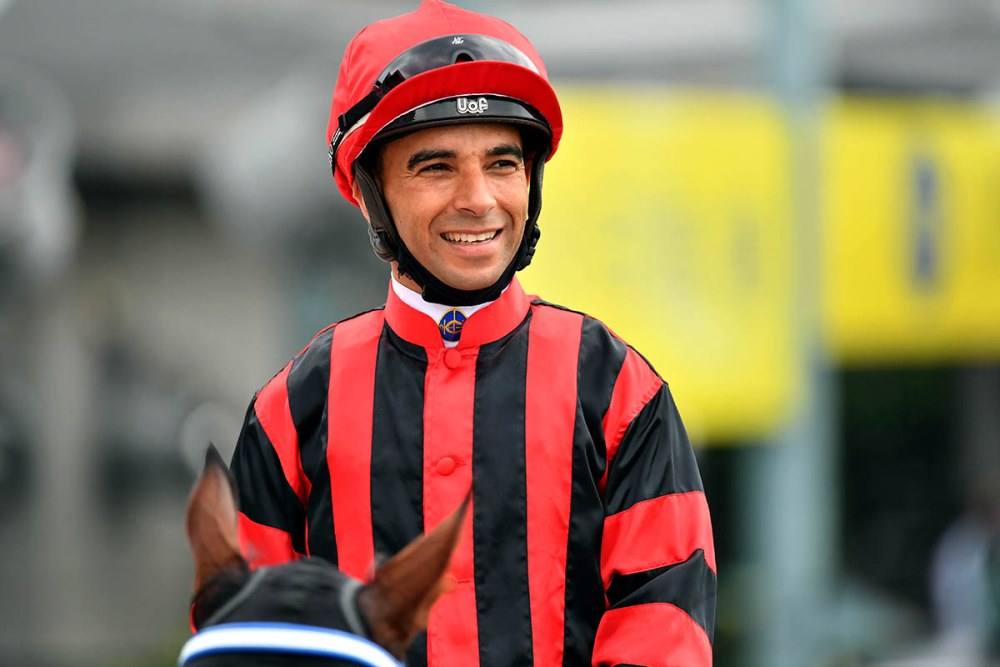 Joao Moreira is in the midst of another superb season.

Joao Moreira, steaming to a fourth jockeys’ crown with 146 wins for the season, 27 clear of Zac Purton, is also confident Drops Of God (神之水滴) can rebound from last-start defeat, when the Brazilian contends the Mossman gelding was a victim of circumstance.

“Circumstances that we were not happy with – he drew wide, he had to cover ground facing the breeze, but he still put on a good effort,” Moreira said. “I can’t be disappointed with the horse – he did his best – just circumstances got him beaten.

“(Barrier) four is much better than 10, apparently it’s going to be a fast-run race and he’ll get cover. I haven’t spoken to John yet and I’m not sure what instructions he’s going to give to me, but it’s not a one-dimensional horse.

“He can lead, he can sit and even come from further back than midfield. Under normal circumstances, I believe he’s going to go out there with a very good winning chance. He has won first-up and run well second-up – so I’m excited to see what he’s going to do this weekend.”

A runaway victor at his only over this course and distance, the Sebring gelding has drawn barrier eight for Moreira as Size continues a patient education with the three-year-old, who had 14 trials before his debut.

“He had a little bit of trouble with his development, but every time I stopped him and go him going again, he seemed to improve,” Size said. “He always sort of looked like he needed a bit of extra education as we went along but eventually he got there and it was probably worth the wait.

“He got a little bit lost in the race, I suppose. He was covering a bit of ground and he wasn’t travelling that well, but he responded pretty quickly when he was asked to go. He finished the race off quite well.

“He came home and he was business as usual. He does well and has always been sound, so I think he’s okay to go back to the races.

“He doesn’t jump that quickly, actually, but I think with a bit of racing, he’ll get used to the tempo of our races and he’ll probably begin better as time goes on.”

Confirming there would be no more late-season newcomers, Size said: “But I’m always open to a pleasant surprise – I’ll take that if it’s on.”

Keith Yeung is hopeful a kinder barrier for Natural Storm will be the catalyst for a strong performance in the Class 3 Needle Hill Handicap (2000m).

Ricky Yiu’s charge dead-heated for fourth from gate 13 behind Enzemble (安承) over 2000m at Sha Tin on 30 May but will jump from barrier five on Saturday.

“Last time we had an awkward barrier draw so we had to take him back. This time we have a better barrier so I hope we can be closer,” Yeung said. “I think the light weight (118lb) really helps. He’s fitter than last time, so I think he’ll run a better race than last time.”

Saturday’s (26 June) 10-race fixture at Sha Tin kicks off at 1:00 pm with the running of the Class 5 Tung Wan Shan Handicap (dirt, 1650m). The retirement ceremony for Exultant (時時精綵) will commence at 12:10pm in the Parade Ring.