Fulfilling predictions that he was primed to have an immediate impact on the 2021/22 term, the dual champion Hong Kong handler delivered in style with a treble, which included the jaw-dropping debut victory of Nervous Witness (緊張大師), Lucky Maryknoll’s (瑪神好運) success and Naboo Attack’s (肥仔叻叻) triumph in the programme feature.

“It’s a big thrill. I didn’t manage to win one (a feature) last season, so it was good to be on the track getting a trophy,” Hayes said before outlining potential Group 1 action in December for the Naboo Attack (肥仔叻叻).

“Depending on handicapping, I think he’ll still be under 100, so we’ll probably give him one more sprint in about a months’ time and then after that we’ll look to run in the big races,” Hayes said.

“I reckon he’ll get to a mile but if he’s winning at the sprint trips, I’ll just keep him fresh. His two fresh runs have been brilliant. We might try stretching him out after December – (but the Hong Kong Sprint) would be the early target race. 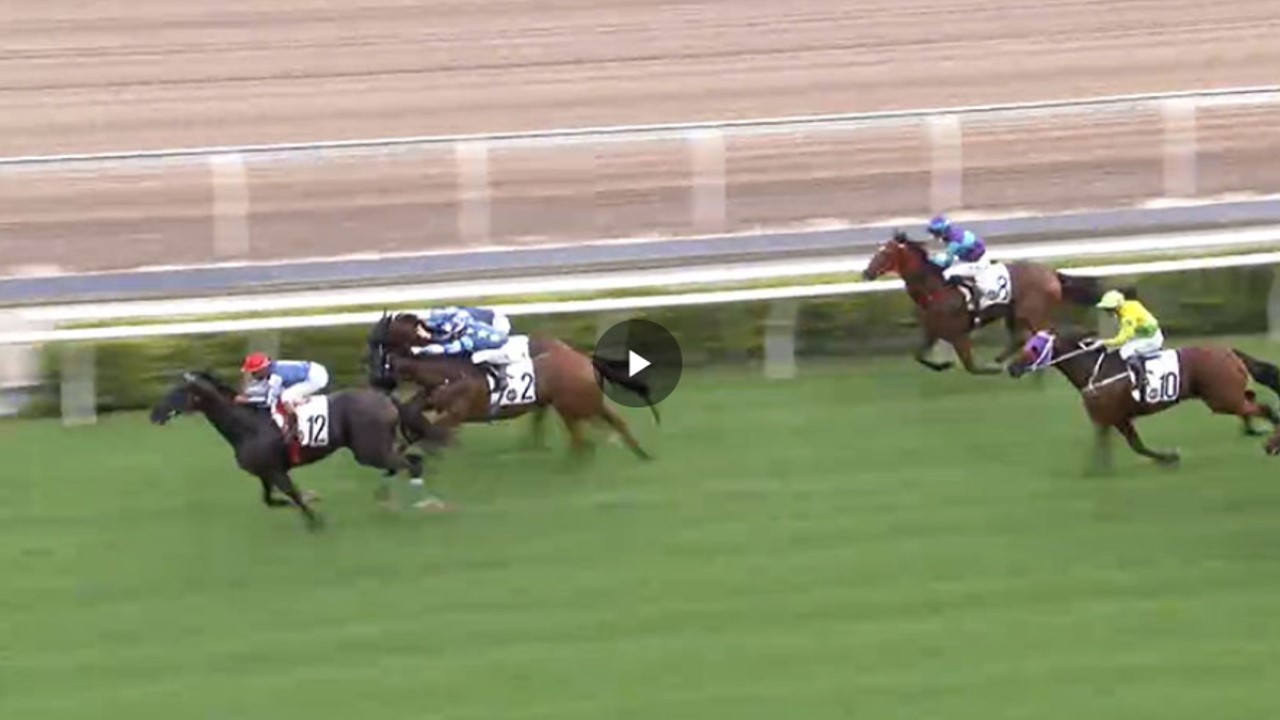 “He’s a horse who can run 1:07 off a hot tempo and that’s good enough to compete in December.”

Maintaining his unblemished record for Hayes in Hong Kong after posting five wins from seven attempts in Australia as Command ‘N’ Conquer, the massive gelding is quickly becoming a cult figure in the city – principally because of his imposing stature, but also because of his stunning acceleration.

Tipping the scales at 1377lb, Naboo Attack (肥仔叻叻) had the benefit of a barrier extension to curb the five-year-old’s claustrophobia, which surfaced when he missed the start in two barrier trials before his season-opening race.

The extra room at the back of the barriers worked perfectly for Naboo Attack (肥仔叻叻), who jumped on terms with the field before settling midfield for Karis Teetan.

“He stood like a lamb with the special gates and Karis having a couple of cracks at learning him in the trials,” Hayes said.

“When he jumped well I just thought he needed a little bit of luck and he got that at about the 300m and he was able to get into his stride. I think he’s a top-class horse with more to come.”

Teetan agreed: “He’s a lovely horse, when he won first up, he looked impressive.

“Just grateful to get the ride on his horse with the light weight (113lb) and he won like a really good horse. I think he’ll get a mile for sure. Once you switch him off, he’s got a great turn of foot. The way he quickened is the sign of a really good horse.”

“That was pretty easy as you like. Apart from his trial he’s never been let go, so that’s what is so exciting about the horse – he hasn’t been drilled down for the race. You don’t see Zac Purton look around that many times do you.

“I could have run him last season and I just thought he would be better as a second-season horse with a trial and then a back off then a build-up. He’ll go through the classes pretty quickly I think, I expect him to win a few in a row.”

Purton, who glanced repeatedly to monitor the opposition from the 300m mark, was similarly taken with the son of Star Witness.

“As far as first starters go, for the good ones, that’s what you expect them to do, right?” the Australian said.

“It was just a matter of seeing how he would handle race day. He was a little bit on edge in the parade. He’s got a little bit to learn. He’s obviously blessed with natural ability, he moves well. He was strong through the line so he’s an exciting horse going forward.”

Lucky Maryknoll (瑪神好運) is the only female galloper in training at Sha Tin, defying 13 male rivals under top weight of 132lb for Ruan Maia to add further gloss to Hayes’ day.

Purton was also upbeat over the prospects of Danny Shum’s Packing Victory (包裝長勝), winner of the first section of the Class 4 Yi Tung Shan Handicap (1200m).

“He’s got a lot of raw natural ability. He’s doing a lot wrong. He’s not clean out of the gates. He gets on his wrong legs but he just keeps galloping.

“It (1200m) is not his right distance – once he gets up to a mile and beyond is when he’ll be more comfortable,” Purton said.

Later on, Teetan went on to collect a treble with victories atop the Tony Millard-trained Ezra (翡翠綠) in the Class 4 Ma On Shan Handicap (1600m) before Star Performance (將耀) saluted in the Class 3 Sunset Peak Handicap (1400m).

“It’s lovely to win, always on the first day it gets the monkey off your back and hopefully he can go on and win another one,” trainer Tony Millard said of Ezra (翡翠綠). 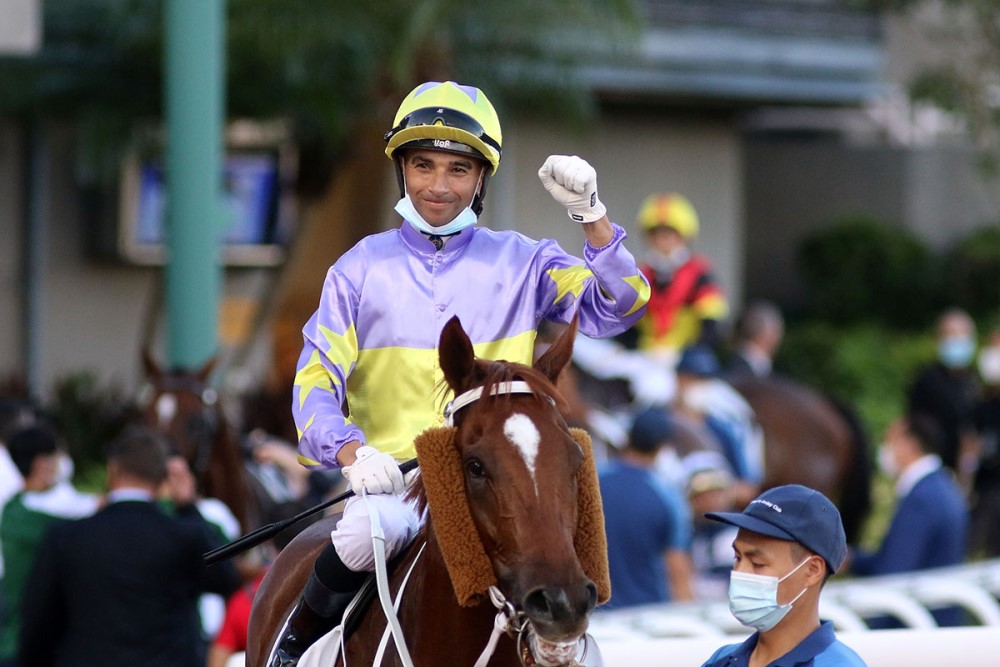 “I’ve ridden him five times for four wins now and I understand him a lot from riding him last season,” Chau said.

Whyte said: “It’s good to get my stable and Jerry off the mark- it’s always nice to have a winner on the opening day. The horse has done a fantastic job for my stable and he’s got a really good association with Jerry.”

Dennis Yip and Derek Leung shared the honour of winning the first race of the new season – the Class 5 Mount Parker Handicap (1400m) – with Victorious Leader (得賞), who improved his record to three victories from 34 starts.

“I’m happy with that – it’s important to make a good start in Hong Kong,” Leung said. 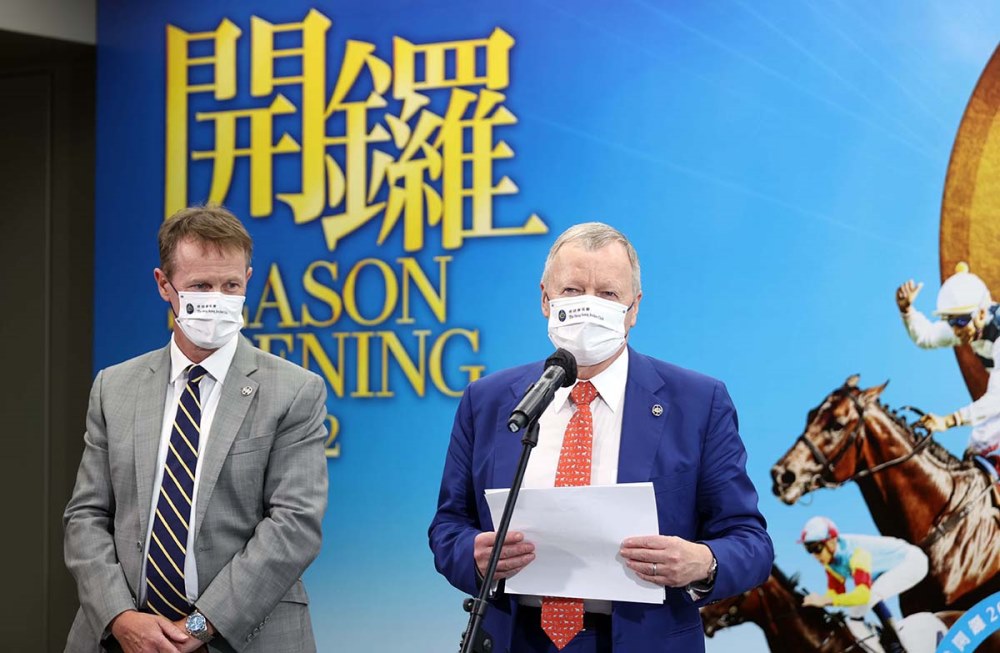 The Hong Kong Jockey Club’s Chief Executive Officer Mr. Winfried Engelbrecht-Bresges said the meeting had surpassed expectations with crowds of 16,356 at Sha Tin and 1207 at Happy Valley for an overall attendance of 17,563 and record turnover of HK$1.441 billion for a season-opening fixture.

“I personally think it was the start we could not have had hoped for,” Mr. Engelbrecht-Bresges said.

“It was a wonderful atmosphere to have our customers back on track. They saw tremendous performances from the sporting side.

“David Hayes had a brilliant start with Naboo Attack (肥仔叻叻). He was extremely impressive, winning the HKSAR Chief Executive’s Cup.

“On the business side, turnover is a record – the highest turnover for the start of the season (beating HK$1.376 billion last year). I personally think it is a tremendous start to the season.

“I am very optimistic going forward. We could not have hoped for a better start from the sporting point of view and the business point of view.