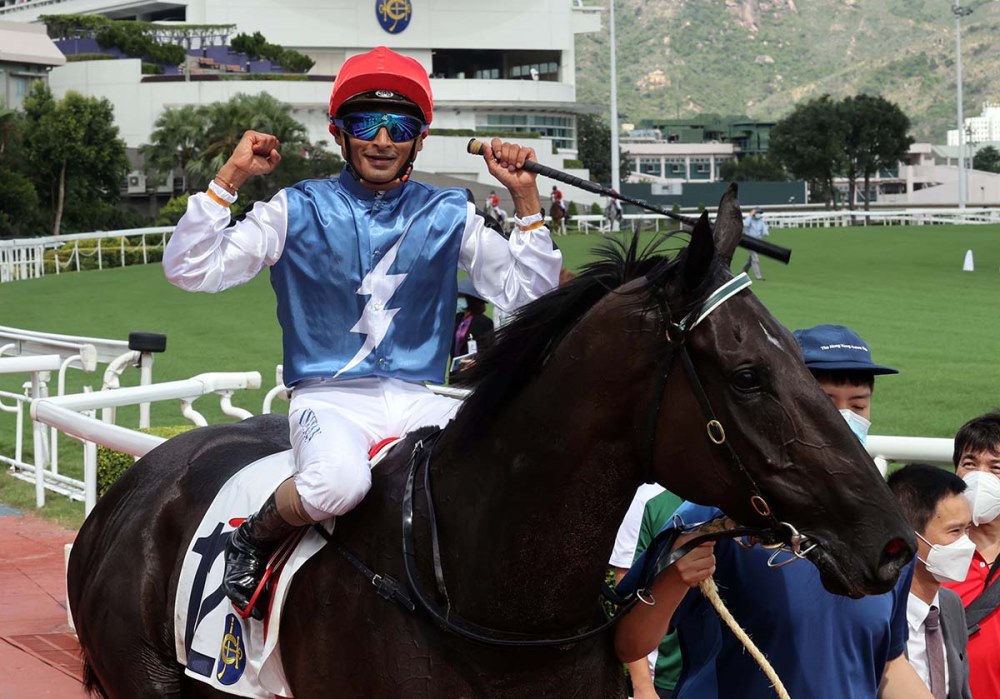 Riding high off the back of an opening day treble, Karis Teetan is heading to Happy Valley this Wednesday, 8 September eager for what his full book of engagements has in store and primed for his reunion with the Tony Millard-trained Gallant Crown (冠寶駒).

“It’s early in the season but it’s nice to get a treble on the first day – I’m just grateful for all of the support I get,” Teetan said.

Happy Valley’s first meeting of the season marks the start of the DBS x Manulife Million Challenge, which runs until 23 February, 2022. The competition is for horses racing in Class 3 and above, with points awarded for first, second, third and fourth place finishes.

A first-up win for Gallant Crown (冠寶駒) in the Class 3 Community Chest Handicap (1650m) would earn the bay 15 points in HK$1 million contest.

“He’s in very good form at the moment, he seems to be getting better with time and age, so I think he’s going to the races in a healthy way,” Teetan said.

Second place would net the charge six points, while third and fourth place in the race offers four and three points, respectively.

The New Zealand-bred managed just one top-three finish in his first seven starts before racking up a hat-trick of wins and his fourth win overall, just three starts later in June.

“He actually did very well last season and I hope this season he can take on from there and improve a bit more,” Teetan said. 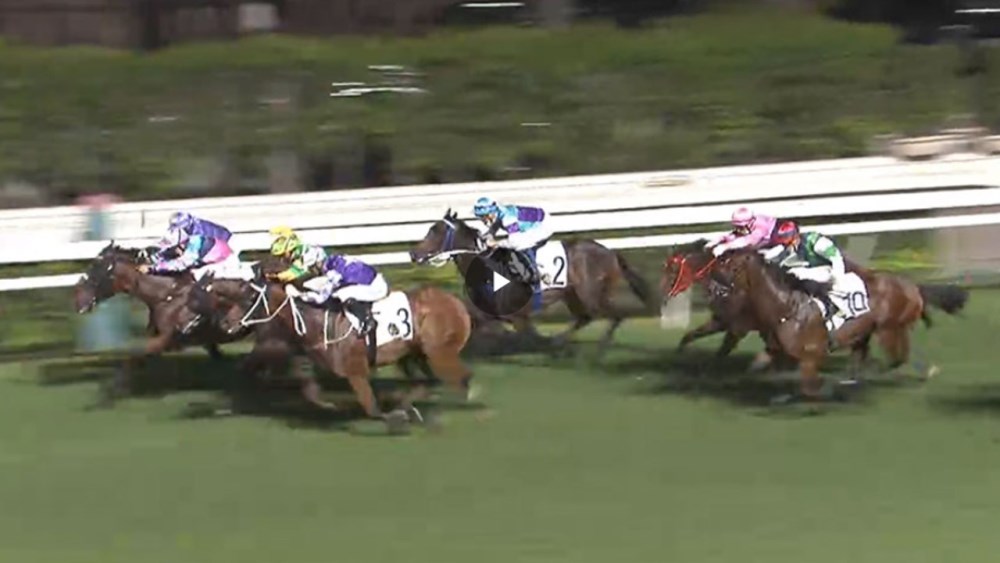 The five-year-old proved to be one of last season’s most improved gallopers – rising from a rating of 46 to 67 across just six starts.

“I don’t think he needs to be too far behind, from the nice gate he can get a beautiful position, switch off and he can make up the ground quickly, so he’ll run well,” Teetan said.

The gelding returns to the races tomorrow evening off the back of one trial on the dirt at Sha Tin, crossing the line midfield in 1m 10.72s over 1200m at the end of August.

“The nice barrier will definitely help him, he’s doing everything well at the moment and the draw will work in his favour,” the Mauritian said.

A total prize pool of HK$1 million will be awarded to owners of the three horses with the highest accumulated points at the end of the DBS x Manulife Million Challenge; first place collects HK$650,000 (with trophy), second gets HK$250,000, while third takes HK$100,000.

“He’s definitely ready, he had a nice strong trial that brought him on, he’s put on a bit more condition this season and he feels stronger – I think he’s a stand out ride for me,” he explained.

Teetan will also look to guide Red Majesty (赤馬雄風) to a fourth successive win in the first section of the Class 4 Chung Hom Kok Handicap (1200m).

“I don’t think the step back in trip is a problem, he’s a horse that improved a lot last season, he’s won some good races and when I worked him he felt as though he was full of confidence,” Teetan said.

The gelding steps down in distance after three consecutive wins over 1650m at the city circuit.

“He’s in good hands – the David Hayes stable is doing well, they’ve started good and I think he is going to run well,” Teetan said. 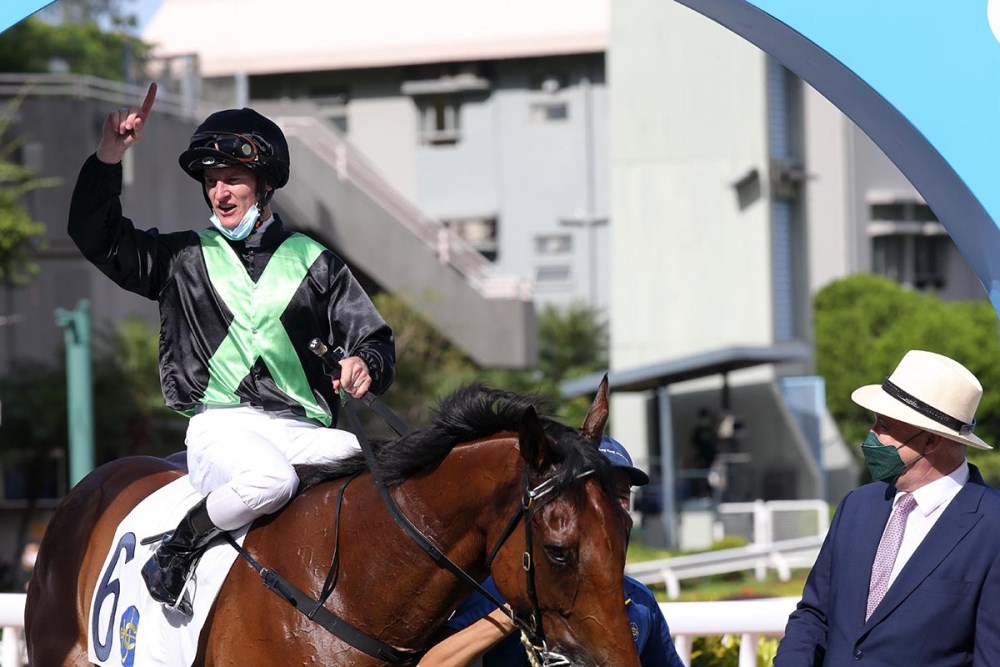 A clean bill of health and a pair of rousing wins from a gifted duo last weekend has Zac Purton buzzing for the new season and he is eager to maintain the momentum with seven rides this Wednesday (8 September) at Happy Valley.

“It’s (body) in a much better place than it was at any stage of last season, I was battling injuries right from the start and all the way through, it was just one of those years but I feel good now, I feel fresh, so let’s hope that means I am going to have a good season,” Purton said.

Nervous Witness (緊張大師) couldn’t have been more impressive with what resembled a track gallop, while Packing Victory (包裝長勝) dispatched 11 rivals while leaking glimpses of inexperience by close to three lengths last Sunday (5 September).

“I think he did a fairly good job overall (last season), he’s a horse that’s a little bit timid in and amongst other runners and a couple of times he didn’t handle that really well but he put in some good efforts,” Purton said.

The New Zealand-bred four-year-old is looking for a first win having twice missed narrowly over this course and distance.

“He’s going to have to put in a good effort here from the gate, it looks like he might get caught wide so we might need luck and see how he goes,” Purton said.

Easily one of the city’s greatest jockeys of all time, Purton is nearing a significant milestone as he sits just three wins shy of 1300 career wins in Hong Kong. 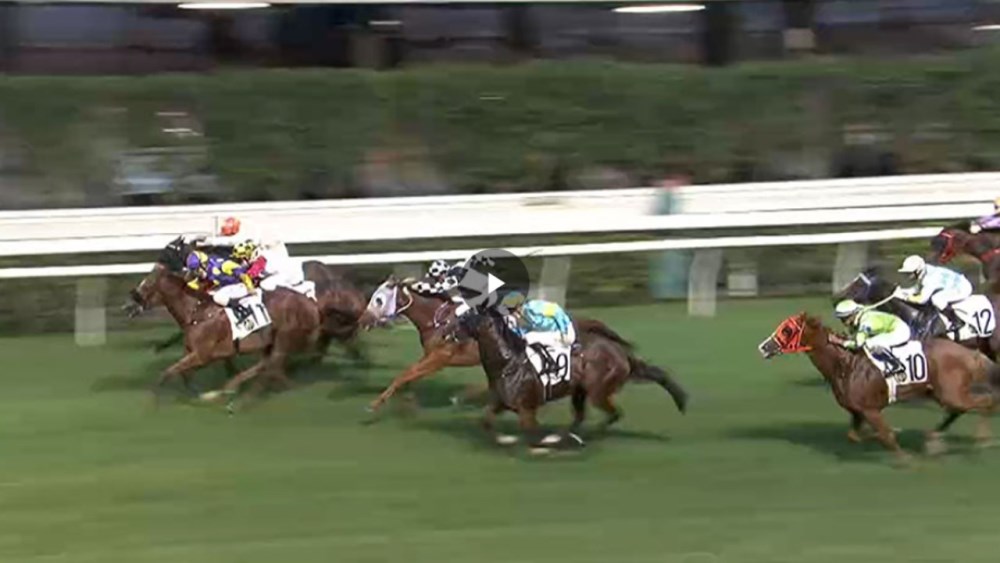 Happy Profit (開心有利) finishes a close second under Purton in May, last season.

“As long as he gets out of the gates cleanly he has some speed but sometimes he can be a little bit shabby getting out, hopefully we can get out and get into a good spot,” Purton said.

The Triple Trio jackpot will be topped up to $10 million, with a single $10 winning unit expected to reap a dividend of up to $17 million. The Quartet & First 4 Merged Pool of the third leg of the Triple Trio and the last race will each be topped up with a jackpot of $1 million, totaling $2 million jackpot for the Merged Pool.

Furthermore, as jackpots are being carried over to the 1st Double Trio and Six Win Bonus on Wednesday, the estimated dividend on a single $10 winning unit could reach $3 million and $13 million respectively.