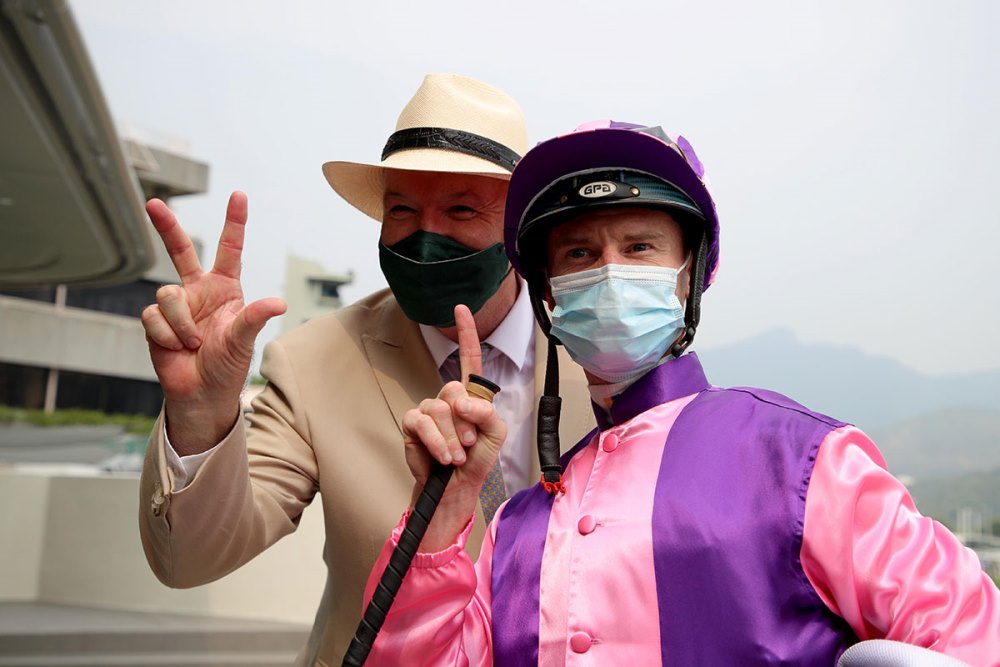 David Hayes credits Zac Purton with helping lay the foundations for his stable’s blistering start to the 2021/22 season after the champion jockey became only the second rider in Hong Kong racing history to post 1,300 wins at Sha Tin on Sunday (12 September).

On a day of landmark success, Purton’s phenomenal feat was overshadowed by Blake Shinn’s stunning quartet as Hayes surged to the top of the trainers’ championship with a second Sha Tin treble in as many meetings.

Fittingly, Hayes and Purton combined with King’s Capital (皇帝金) in the second section of the Class 4 Ngau Tau Kok Handicap (1400m) as Purton joined 13-time champion Douglas Whyte in an elite club as the only jockeys to amass 1,300 winners or more in Hong Kong.

“It’s nice, of course. It’s always nice to tick these milestones off. It was good to get over the line and it’s nice to ride another winner for ‘Hayesey’, too,” said Purton, currently riding without injury issues, unlike last season. “I feel good. I feel fresh. My body feels good, so I just keep going.”

Purton finished the day with a double and outright leadership in the jockeys’ championship with six victories after partnering Jimmy Ting’s My Sugar (糖糖幸運) to success in the Class 3 Kwun Tong Handicap (1400m) – and 1,301 triumphs overall.

“He (Purton) really helped me settle in, he was good and a big help through my quiet run,” the dual Hong Kong champion trainer said of his return to Sha Tin last year. “He won on some important ones for me last year, they weren’t big wins – but they were wins.” 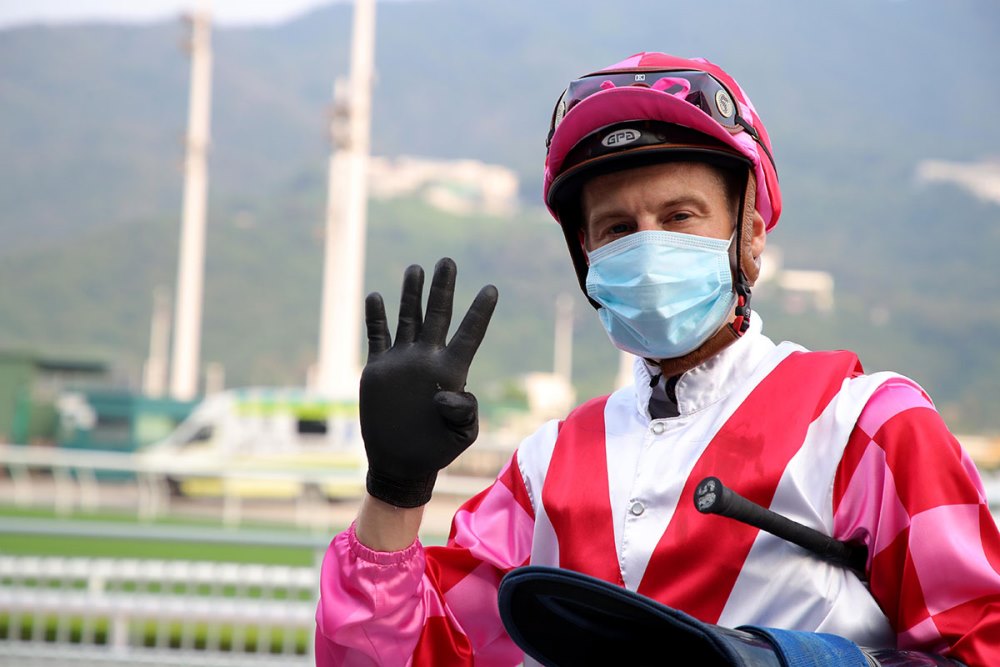 “It’s a red-letter day for myself, it’s huge. I’m just stoked – a bit overwhelmed. I’ve been waiting a long time for something like this to happen,” the Melbourne Cup-winning jockey said.

“With David Hayes coming in last season and now having his support behind me, it’s been instrumental for me. To get four winners, I’m just rapt.

“It’s nice to repay everyone’s faith in me by having a big day.

“I’ve had some big days back in Australia, but this is the world stage where you want to ride winners against the elite jockeys.

“That horse, I just love him. He’s just a beautiful horse and I was hoping he would do something like that today.”

“He did a few little things wrong, he was a little bit tardy away – but then he mustered speed beautifully and settled well in the box seat. He presented like he was going to win by three lengths but just floated a little bit,” Shinn said.

“There’s plenty of upside. He’s a lovely horse. He was well presented today and it’s nice to be given the opportunity to ride these exciting young horses.”

Prior to sealing his four-timer, Shinn, 33, posted his third win in as many rides when Golden Four (金碧科) surged late to claim the Class 5 San Po Kong Handicap (1400m) for Michael Chang.

“First ever treble in Hong Kong – it’s very meaningful, you know,” he said, never daring to expect the day to get even better.

“You’ve got to pinch yourself. You’re always hoping for a day like this to come but you never expect it to happen. It’s fantastic.

“I’m just building off last season (24 wins) and it’s all about opportunities. Coming to the races with nine rides instead of three or four is enhancing my chances and the horses I’m riding have got chances. Today the cards appear to be falling my way.

“The horse did a great job, got into his own rhythm from start to finish and well done to Dennis – he had the horse ready and he delivered,” Shinn said. 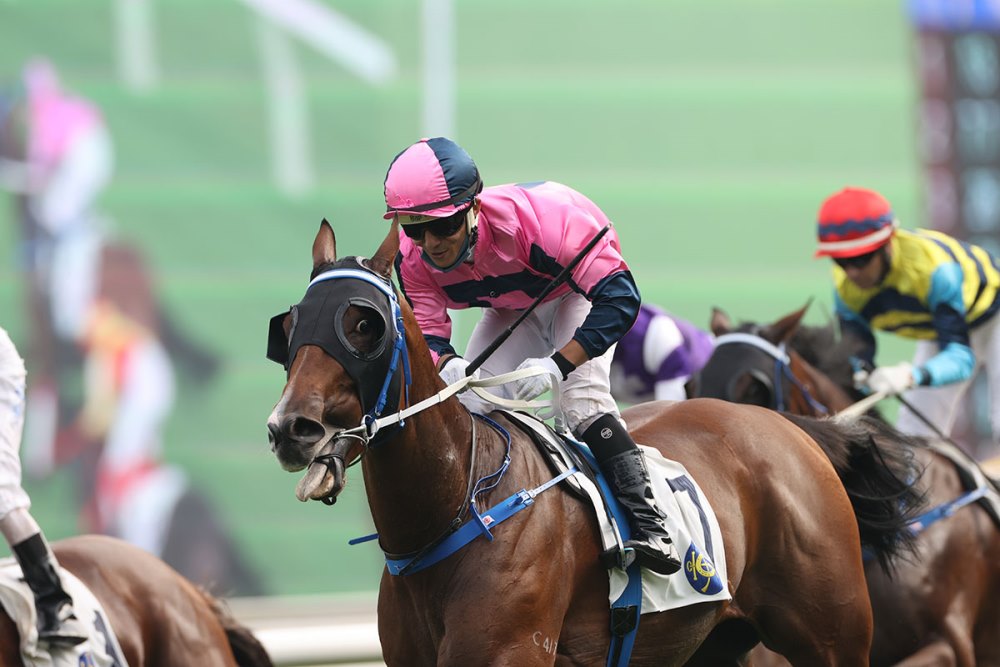 “Flying Bonus (獎金大王) and Land Power (鋒芒快露), I didn’t really expect they would win today but I did expect them to run well – the wins are a bonus,” Chan said, drawing praise from Fownes.

“It’s nice to see Alfie ride a double,” Fownes said. “Great to see him and Blake (Shinn) do well – guys that are normally struggling to get decent rides, ride six (winners) between them.”

Michael Chang and Joao Moreira combined with Steel Win (鋼鐵福陞) to capture the second section of the Class 4 Lam Tim Handicap (1200m, dirt) after the Press Statement gelding showed customary tenacity to repel the fast-closing The Best Hero (豐彩華庭) by a short head.

“It’s a nice double, it’s been nearly two years. My luck has changed – luck is on my side today,” Chang said.

Chad Schofield posted his first winner of the season with a flawless display on Jimmy Ting’s Gluck Racer (好運寶馬) in the Class 3 Diamond Hill Handicap (1200m).