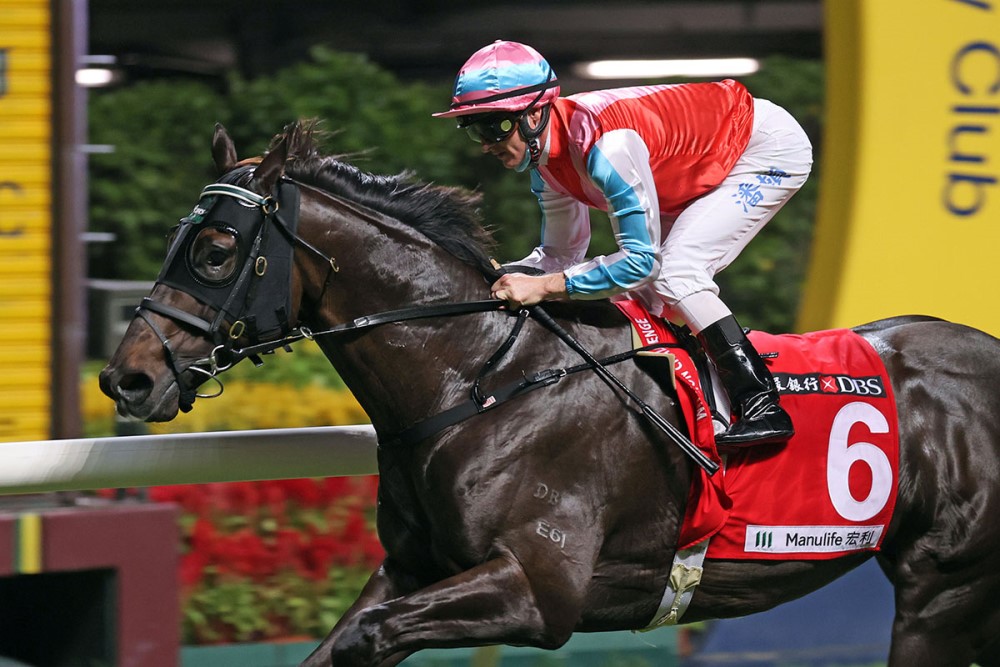 Purton now leads arch-rival Joao Moreira 11-8 in the jockeys’ championship, while Hayes has an 8-6 edge over Danny Shum after six of 88 meetings.

Purton, 38, was delighted with Harmony N Blessed’s (人和家興) performance after being pressured by Jerry Chau on Harmony Fire (天火同人).

“Jerry made me earn it early, we were rolling and he just kept sneaking up underneath me. Obviously, he wanted to make me work, which was to his detriment, but I think it helped my horse because you don’t want to fight him,” four-time champion Purton said.

“Just being able to let him roll, he really enjoyed it. He let down really nice. He’s always shown he’s been talented, but he beats himself more times than not. He just wants to fight the riders all of the time.”

As to his own form, Purton said: “It helps, hopefully there’s a six-timer around the corner.”

Hayes was elated after posting a double to match that of his sons Ben and JD at Flemington Racecourse earlier on Wednesday.

“It’s been a big day with the boys training a double at Flemington (in Melbourne) today and now this tonight,” Hayes beamed, reflecting on Harmony N Blessed’s (人和家興) effort set a new record.

“It’s always nice to have one (a record) in the back of the book,” the dual Hong Kong champion handler said. “He looked very promising last year, but he was just a bit immature – consistent but immature. This year he’s stronger, he’s eating better and I think we’ve got a very good Happy Valley horse.

“He looks good and Purton gave him an armchair ride from barrier three. I think we’ve (Purton and Hayes) got a good record as favourites together – we’ve been winning a lot of races.”

Hayes and Purton have combined for four wins this term.

The duo united with Red Majesty (赤馬雄風), who posted his fourth win in five starts after Purton coolly dictated terms on the gelding to land the Class 4 Moreton Handicap (1650m).

“This horse has done really well, four wins since last April,” Hayes said. “This horse can stay in Class 4 and be competitive again.”

Purton logged the second leg of his treble after stalking the speed on All Beauty (美麗滿滿) before the All Too Hard gelding finished powerfully at only his third start to land the Class 4 Moorsom Handicap (1200m) for Frankie Lor.

“The horse is very fit, coming into his third race of the season. He pulled up very well from the other day. He was very close to winning, got beat a nose. This race came really quick, but I thought ‘Put him in while he’s in good form.’ There were only seven other competitors,” Fownes said.

“Looking at the race, there didn’t appear to be much speed, so I left it to Joao and he did a good job.

“Obviously now, we’ll go to Class 3 with a light weight and hopefully he can win again.”

Benno Yung secured his first win of the season in emphatic style when All Joyful (皆大開心) claimed the Class 5 Price Handicap (1650m) under Matthew Chadwick in a class record of 1m 38.91s.

“He’s just a late maturer, he’s a staying type so he’s taken a bit of time to acclimatise. I think he can also handle Class 4, at the end of last season he started to come along so I think he will keep improving,” Yung said.