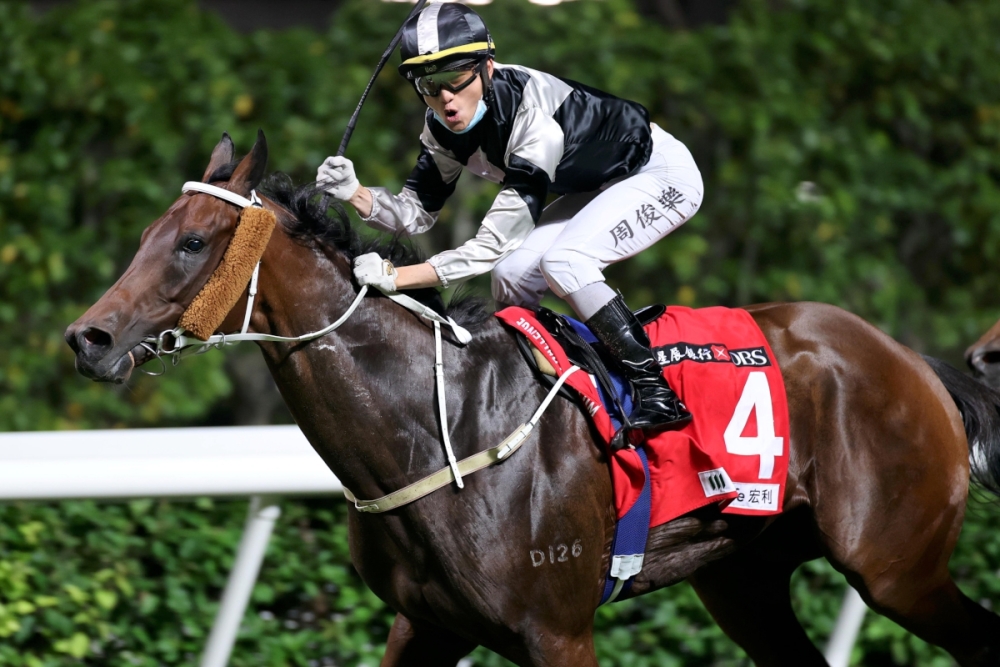 Marking the end of a decorated apprenticeship in emphatic style, Jerry Chau intends to capitalise on status as the second-fastest rider to make the graduation from indentured to senior ranks after Transcendent (場場精綵) snared the Class 3 Gloucester Handicap (1200m) at Happy Valley on Wednesday (6 October).

Competing in his 639th Hong Kong race, 21-year-old Chau unfurled a clinical ride on Tony Cruz’s sprinter, stalking the speed before taking command inside the final 100m and then gesturing jubilantly on crossing the line as his parents watched from the grandstand.

“Amazing. Finally, today, to get 70 winners. I’m very, very excited. My parents have been coming to every meeting waiting for me to get to 70 winners and it happened now. I’m very excited,” Chau said, affirming his desire to improve further.

“I’ve been very lucky to have the support of so many trainers and my boss (Douglas Whyte) gives me every opportunity. He has helped me improve very, very quick. It’s amazing for this to happen.

After joining the Hong Kong Jockey Club’s Apprentice Jockeys’ School in 2015, Chau was sent on an overseas placement in 2019, honing his skills Down Under in South Australia with leading trainer partnership Leon Macdonald and Andrew Gluyas in Adelaide, while accumulating 77 wins abroad.

He emerged as a bona fide future star last season, riding 58 winners to shatter Chadwick’s previous record haul of 55 victories as an apprentice through a single season.

Whyte expects to continue a close and successful relationship with his protégé.

“It’s been a long time coming, he’s been unlucky on a few, but he’s been riding well and he deserves it,” the 13-time champion jockey said. “I think now he’s going to get more opportunity at three pounds, it’s going to open up a bigger margin for him and a lot more opportunities.”

Chau’s elevation came as Joao Moreira breathed confidence into his championship defence with a treble, crowning the three-timer with a resounding triumph on Me Tsui’s Telecom Fighters (電訊巴打) in the Class 2 Fleming Handicap (1650m).

Cutting Zac Purton’s lead to four – 17 to 13 – the Brazilian also saluted atop John Size’s A Smile Like Yours (銘記知心) in the first section of the Johnston Handicap (1200m) after steering Frankie Lor’s Savvy Kingman (皇寶) into the winners’ circle, coolly dictating terms from the inside gate to lead throughout to claim the Class 4 Luard Handicap (1800m).

Undaunted by a challenging start to the season, Keith Yeung was rewarded for toil and patience when Jimmy Ting’s Shadow Breaker (御風超影) swept past Ernest Feeling (真感) and Charizard (噴火龍) to lift the Class 4 Lockhart Handicap (1650m).

“I’m very happy that Keith was able to help me have a winner. I thought it was impossible, I don’t know he could win having drawn 12, it is very difficult. He was very lucky because the pace was too fast, that’s why he could come from behind,” Ting said, celebrating a double.

“Even though he is not in very good form, he had the rating and the race had a slow pace, which helped him a lot,” Ting said.

On Excel Star (優達星) leads throughout under Chad Schofield.

“It’s not easy for him. The horse is tough and was able to take the lead from a good draw and Zac gave him a good ride,” Yung said of the Shamus Award gelding, who broke through at his 12th attempt.

“Happy Valley is most suitable for him. I think he can run 1200 (metres) with a soft lead.”

Veteran Dynamic Eagle (動力飛鷹) stormed late to clinch the Class 3 Harbour Handicap (1800m) for Danny Shum and Alexis Badel to notch his fourth victory at the city circuit over distances ranging from nine furlongs to 2200m.

Teetan’s misfortune’s became Harry Bentley’s gain when the Englishman replaced him on David Hayes-trained Sight Hero (勇眼光), who emerged triumphant in the second section of the Class 4 Johnston Handicap (1200m).

“It was bad luck for Karis, of course,” Hayes said, after posting his 13th victory of the term. “But Harry did a great job. He gave the horse a good beginning and a nice rest and he was strong at the end, so it was excellent.

“The horse did a really good job.”