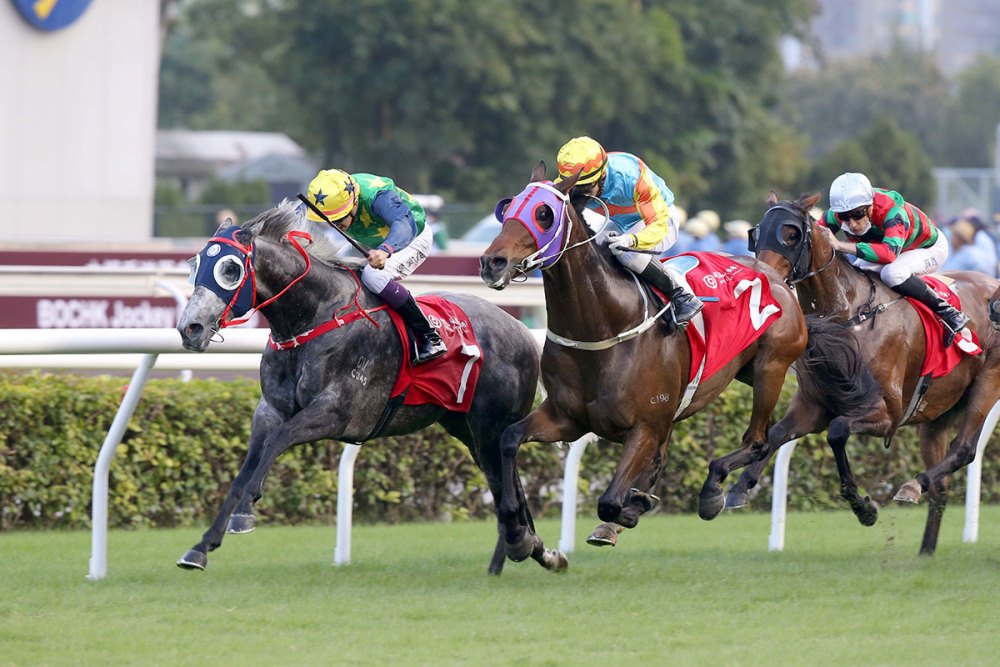 The middle leg of a Lor treble, Reliable Team (精神威) refused to yield in a slowly-run race – the winner clocked 2m 03.86s, more than three seconds outside of standard time – out-lasting Ka Ying Star (嘉應之星) by a neck with Glorious Dragon (龍鼓飛揚 ) a further length and a quarter away in third.

Leung secured victory by stacking up the field before dashing over the last 400m in 21.81s, rendering hopeless any effort from back-markers to reel Reliable Team (精神威) in.

“We were always trying to get him to lead in the race and he got a bit lucky, there was no pressure on us to go too quick,” Leung said. “So, the horse was quite relaxed and he’s very fit.

“Step by step, we build the speed up. He responded very well and I think we were very lucky.

“The other horses didn’t give us any pressure, so we saved some strength for the last quarter (400m). I think 2400 (metres) will be even better for him,” Leung said.

Reliable Team (精神威) is not for catching.

Lor, who also saluted through the day with Master Eight (八仟師) and Celestial Power (天駟), was also surprised no other horses pressured Reliable Team (精神威).

“Ka Ying Star (嘉應之星) jumped a bit slow so my horse was on his own and could relax a bit through the race,” Lor said.

Lor, who leads the trainers’ championship with 21 wins for the term, said while he had entered Reliable Team for both the G1 LONGINES Hong Kong Cup (2000m) and Vase (2400m), he has a preference for the longer trip.

“I enter him both, but I think 2400m should be better for him,” Lor said. “We need to keep the horse in good form and then we’ll see.”

“Once again, he showed that he’s got quality. He’s won very impressively once again – 1000m down the straight didn’t stop him and I can describe it by saying it was even easier for him than racing an extra furlong,” Moreira said.

“I’m very pleased, proud and I’ve got to congratulate Frankie’s team for doing a great job.”

Unbeaten in three 1200m starts before today’s display, Master Eight (八仟師) will be considered for a tilt at the G3 Bauhinia Sprint Trophy Handicap (1000m) on 1 January.

“I was worried about the distance, his first time at 1000 (metres), but he was very impressive,” Lor said. “I don’t know how good he can be but I just hope he can keep improving and he can go up to Group races.”

Lor sealed training honours on the programme with Celestial Power’s (天駟) narrow victory under Matthew Poon in the Class 2 BOC Credit Card Handicap (1800m) in a finish where the first five horse were separated by a neck.

Zac Purton extended his lead in the jockeys’ championship over Moreira to nine wins after posting a treble, completing a fine afternoon with victory atop Tony Cruz’s impressive California Spangle (加州星球) in the Class 3 BOCHK BOC Pay Handicap (1200m).

“What impressed me today – and he did it in his last barrier trial – was that he finally jumped,” Purton, who now has 37 winners for the season, said. “In his starts as a Griffin and first-up this season, he’s just hesitated when the gates opened.

“But he’s taught himself now and obviously if he keeps on getting out like that, he’s going to help himself. He did it nicely today.”

Mourning the passing of his mother Pauline, David Hall shared a double with Purton with Good Buddy (好拍檔) and Captain Win (旭日昇), who raced in Australia as Captain Spud and was previously owned by one of Hall’s closest friends, the late Australian football legend Danny Frawley.

Captain Win (旭日昇) gets off the mark for Purton and Hall.

“It’s all a bit tough and this is Danny’s horse as well, so the whole thing is a bit raw at the minute,” Hall said following Captain Win’s (旭日昇) victory in the Class 3 BOCHK Asset Management Handicap (1400m). “For him to win today is indicative of what his potential is and I think he can keep going a bit further.

“When he walked out the gates today, it was looking highly unlikely that he would (win), but he got his rhythm right and Zac was lucky enough to get the right run and pushed him through and got the job done.”

“I think he’s progressive, I think he’s still a work in progress a little bit. He’s out of a Zabeel mare and he’s a bit of an excitable horse. He’s taken a big step in his manners from this year to last year. I think we’re still getting there with him, hopefully there’s more to come. There’s scope for more.”

“This season, he’s improving, this horse. I think he will keep on improving,” said Ting, who now has 16 wins for the season to be third in the trainers’ championship behind Lor (21) and Cruz (16) as Alexis Badel continued an excellent start to the campaign with success on Chris So’s Entrusted (安頌) in the Class 3 BOCHK Wealth Management Handicap (2000m).

Japanese champion Yuga Kawada continued a strong build up to the LONGINES International Jockeys’ Championship at Happy Valley on Wednesday, 8 December with a five-timer at Hanshin Racecourse this afternoon, with the day’s feature race G1 Mile Championship (1600m) won by Gran Alegria.