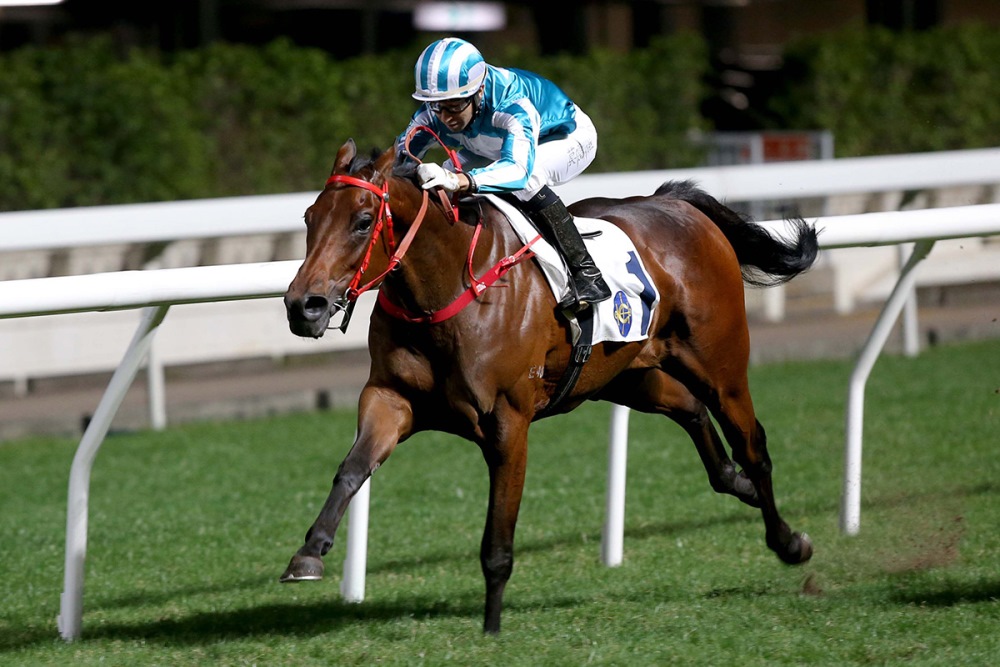 A protégé of Ivan Allan and famed by Little Bridge’s 2012 G1 King’s Stand Stakes victory at Royal Ascot, Shum is one of the most respected horsemen in the sport and the milestone victory leaves him in elite company in Hong Kong.

Joao Moreira, who notched a double on the programme but was eclipsed by Zac Purton’s treble, is bullish over Romantic Warrior’s (浪漫勇士) prospects after producing a rail-hugging ride on the Hong Kong International Sale Graduate.

“It was very nice win. We expected him to be much closer, but he dashed home. He’s got a lot of ability. I think the handicapper will need some time to stop him winning races,” the Brazilian said.

Cheerful Days (超好日子) rounds the field for an impressive win.

“That’s very cool, I knew I was in good form and I had the momentum, so it’s good to be ride in the competition (IJC) again and I am looking forward to it – it’s great,” the Frenchman said.

Moreira and Frankie Lor combined with We The South (南區寶), who again demonstrated a devastating affinity with the city circuit’s speed course with his sixth triumph over five furlongs – a two-length victory in the Class 3 Colinton Handicap (1000m).

“He likes it here over 1000 metres,” Lor said. “The track suits him and he seems to enjoy it.”
Lor celebrated a double – and his fifth winner from 11 starters – when Flaming Passion (紅衣火旺) launched late to claim the first section of the Class 4 Murrayfield Handicap (1200m) for Matthew Chadwick.

The win left Lor with 23 victories for the campaign.

David Hall and Purton continued a productive liaison when the pair combined for a third win in two meetings when Yee Cheong Warrior snared the first section of the Class 4 Stockbridge Handicap (1650m).

“He ticked a lot of boxes tonight – the jockey and the barrier (gate one) – he had everything going for him tonight and he got the job done,” Hall said. “He’s rated well enough (45) that he can do it again.”

Riding in supreme form, Purton quickly notched a double when he piloted Francis Lui’s Run The Table (信心滿滿) from barrier 12 to one off the fence in fourth place before claiming the Class 5 Myreside Handicap (1650m).

“All credit to Dad, he’s freshened him up really well. The horse is difficult to train. You’ve got to keep him fresh while keeping him fit without making him too flat – so, it’s a real balancing act,” Luke Ferraris said, noting the unique challenge of Hong Kong racing.

“Winning makes it all the more enjoyable, but it is one of the toughest jurisdictions to do well in. I’m pretty pleased at the way things are going. You always hope things could be better, but it’s nice to get a win.”