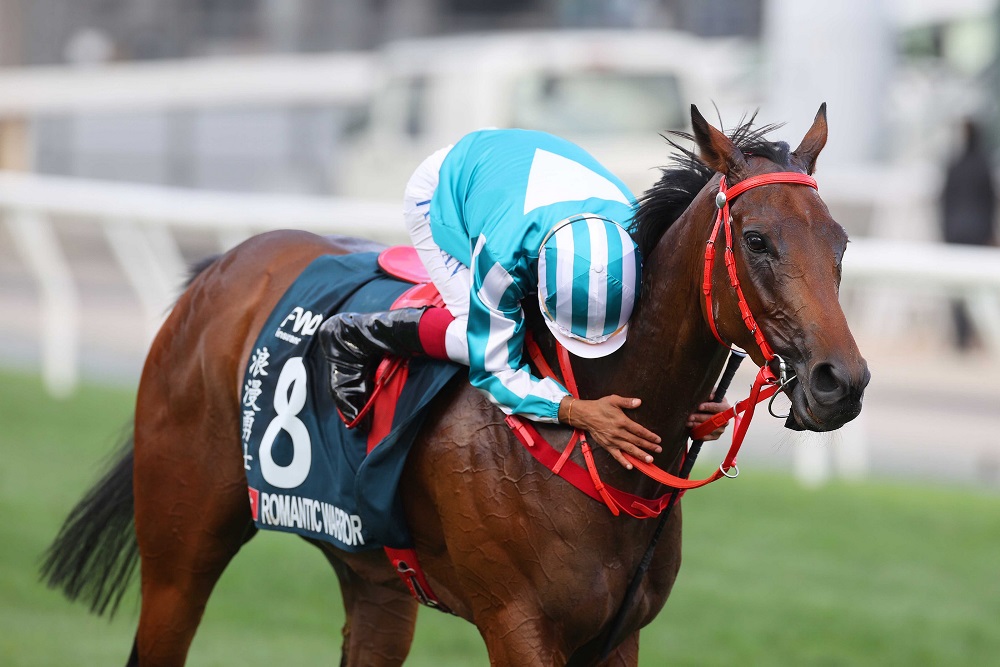 Surging into history with another remarkable performance, Romantic Warrior (浪漫勇士) has capped an unlikely ascent from obscurity to stardom for Danny Shum and Karis Teetan with a stunning HK$25 million G1 FWD QEII Cup (2000m) victory at Sha Tin on Sunday (24 April).

With his seventh victory, the son of Acclamation boosted his prize money earnings to an imposing HK$39.96 million – a figure bolstered by a top-up bonus of HK$900,000 for his latest conquest, a scintillating two-length success over Tourbillon Diamond and Panfield in 2m 00.13s.

Cosseted away from trouble in fourth place behind a stop-start tempo to the 800m mark, Romantic Warrior (浪漫勇士) angled into clear running in the straight and was never seriously challenged, powering over the final 400m in 22.62s to seal a wondrous first-season.

For Teetan, it was a perfect bookend to an already glorious week.

“It’s been a great week with my little baby girl (Isabelle) being born on Tuesday, so all my focus was going into her. I was trying to be a daddy and also put my focus into the racing,” the Mauritian said. “He’s an amazing horse, well done to the team.

“The Derby was very special for all of us. This race we thought was a good plan with no international horses coming but we had in mind that he’s a bit younger than the other horses – but he’s better than all of them so he proved what kind of horse he is today. “Danny and his team have done a great job.”

Renowned as a horseman with a keen eye for the smallest detail, Shum was adamant at his first inspection of Romantic Warrior (浪漫勇士) at last year’s Hong Kong International Sale that he was clearly the best lot on offer. 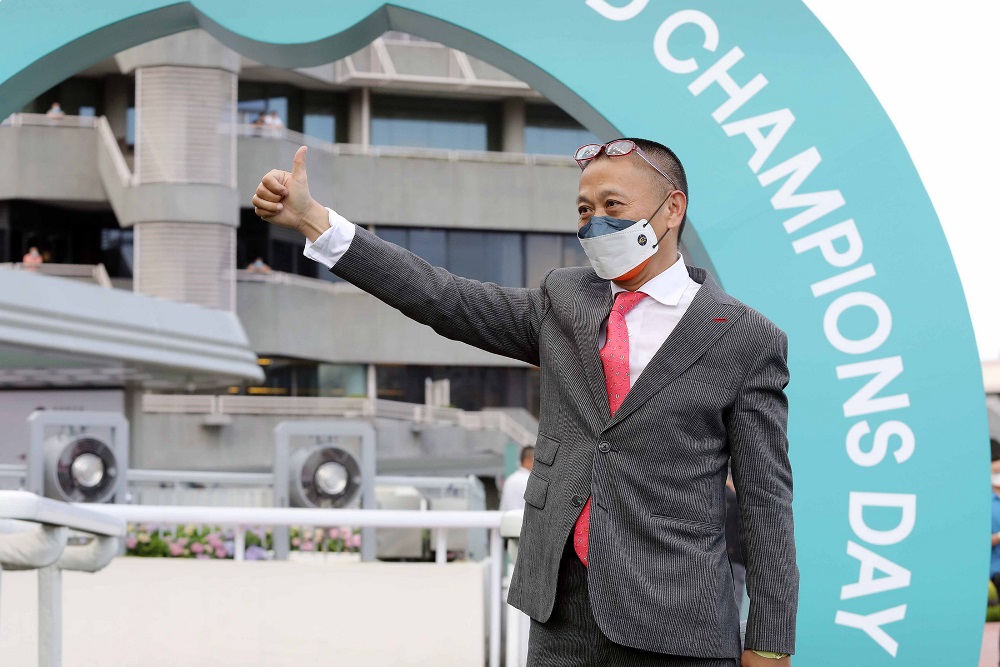 “I feel great and happy to see the horse steadily improve and I’ve always loved his manner, but his manner is getting better and better,” Shum said. “He’s very easy to train. He’s a very nice horse. He’s a superstar.

“He’s surprised me. When I bought him for Mr Peter Lau, I thought he was a nice horse – that’s all I could say. I thought in the Hong Kong International Sale he was the best horse but I didn’t know how good he was.

“I’m very happy for the owner, he has encouraged me to do better and better.”

“It (reaching 1,400 wins) just means I’ve had a lot of support and success in my time which is nice,” Purton said. “You can’t do it without the horses and the connections. I’ve had another good season. I’ve had a great career here. It’s nice.” 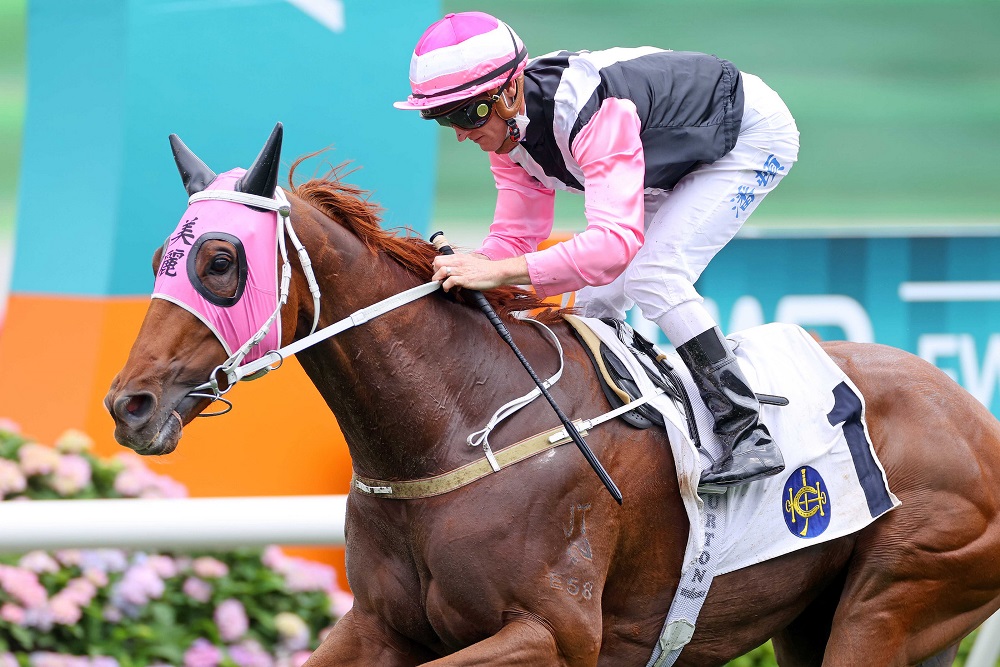 Asked if Whyte’s record was an objective, Purton, 39, said: “It’s there, it’s within touching distance. If I wanted to go for it, I can get it – we’ll see.”

“It’s something to be proud of,” Fownes, 54, said after joining John Moore (1,735), John Size (1,395) and Tony Cruz (1,393) in an elite cluster. “I would not have got here without a lot of people that have helped me through my life. Very happy that we’ve hit the big 1,000 and looking forward to continuing to win some good races with my team and all the hard work we’ve done together.

“A big shout out to my wife (Alix), she’s my driving force, pushing me to be very successful – and my boys (Ryan, Ronan and Riley) – and I love her for that. We’ve been blessed, we’ve had so many good horses. There have been so many highlights, my first winner (Champion Boy (更叻仔) in 2003) at the start of my career. It was ‘game on’ from then.”

Hayes closed the meeting in style when Lucky With You (幸運有您) snared the Class 2 Silent Witness Handicap (1200m) under Teetan to clinch a HK$1 million High Achievement Bonus by winning a Class 2 when rated at 80 (82) or higher before turning five.

Lucky With You (幸運有您) lands the nightcap at Sha Tin.

Referring to the performances of Golden Sixty, Wellington and Romantic Warrior and the overall success of the day, The Hong Kong Jockey Club’s Chief Executive Officer Mr Winfried Engelbrecht-Bresges said: “Today was FWD Champions Day and it really was a day of champions, it was the day when records were broken and a day of great excitement because our owners were able to return to the track. Even though we had only just over 1,000 owners and guests, it sometimes felt like 10,000 because of the vibrancy of the day. It has been a wonderful day.

“Today was really the day when champions were at their best and, with the support of our sponsor FWD, I would describe the day as a great success and a restart of the vibrancy of Hong Kong racing with it no longer being staged behind closed doors.

“We have seen world-class performances from Golden Sixty (金鎗六十) in the FWD Champions Mile, Wellington (福逸) in the Chairman’s Sprint Prize and the remarkable performance of Romantic Warrior (浪漫勇士) in the FWD QEII Cup.

“I would like to thank the Hong Kong Government for allowing us to keep racing and also for giving us permission to have owners back at the track today. We look forward to being able to welcome back our members and members of the public to join us at the track.”