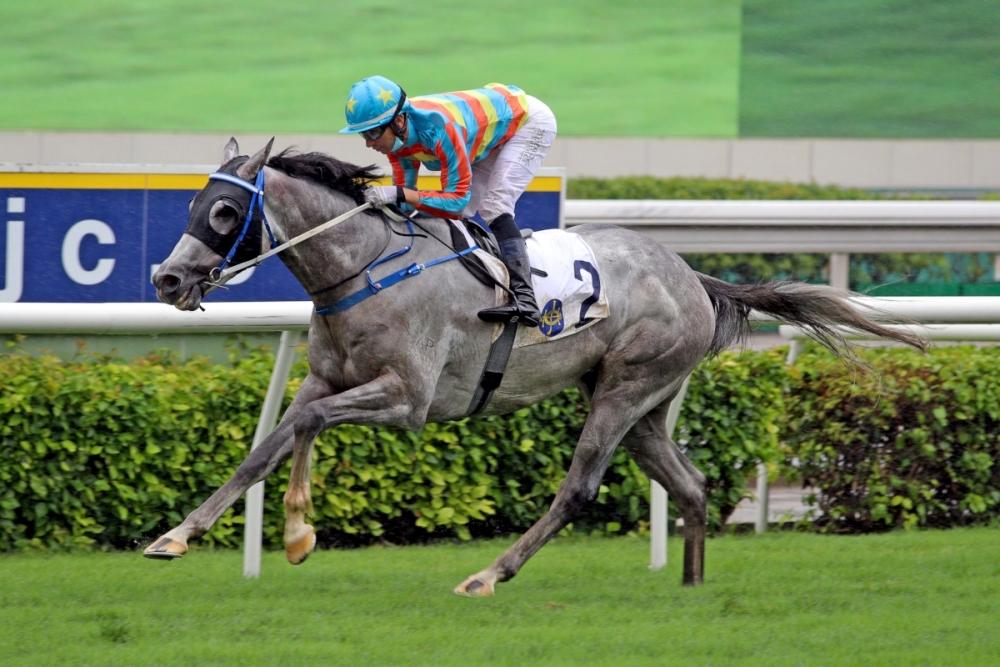 Revelling in the conditions, Senor Toba (多巴先生) romps to victory.

Fownes was adamant pre-race the effort of Romantic Warrior (浪漫勇士) to win the G1 FWD QEII Cup (2000m) and California Spangle’s (加州星球) feat to run second to Golden Sixty (金鎗六十) in the G1 FWD Champions Mile (1600m) after the pair’s stirring Derby quinella made the Classic one of the best Derby form lines in the past two decades.

Senor Toba (多巴先生) finished fourth in the Derby and, stretching to 2400m for the first time in his career since running second in the G1 Queensland Derby at Eagle Farm in 2021, the grey relished the extended trip under steady rain.

“He’s done it really nice,” Fownes said. “Obviously, they crawled as well but it wouldn’t have mattered either way. If they went hard, it would have been even better for him. He’s a real proper stayer, a really good horse and now we go forward to the Champions & Chater Cup (on 22 May) with him.

“He’s a good horse and these 2400m races will be right up his alley. I didn’t even trial him between the Derby and this race. He’s a pretty clean-winded horse. We give him some nice long work and he enjoys that way of training and he’ll pretty much do the same going forward to the next race.”

Moreira was similarly impressed after a facile ride on the four-year-old, positioning him in third place behind Enjoying (安采) and Butterfield (勇猛神駒) before briefly attempting to angle into the clear on straightening, only to change course.

“The slow-run sections forced him to just sit there and dash home. I was coming out to try to get to the outside of the two leaders (Enjoying (安采) and Butterfield (勇猛神駒)) at the top of the straight, but I could see the leader moving off the fence and leaving me a nice gap on the inside so I just went for it,” Moreira said.

“When I was about to pass, I had that squeeze and that just held me back a little bit but once he really put his head fully into it, he dashed home like a good horse and hit the line in a way that impressed me quite a bit.”

Fownes and Moreira quickly slotted a race-to-race double when Galaxy Witness (喜旺駒) posted his fourth win in as many starts to claim the Class 3 Inch Arran Handicap (1400m) to justify Fownes’ high opinion.

“He’s got his best racing ahead of him and he’s going to be a good horse for next season,” four-time champion trainer Fownes said. “We’ve always felt from day one that he’s a miler. We’ve built him up nicely by mixing up his distances and he’s a really nice horse.” 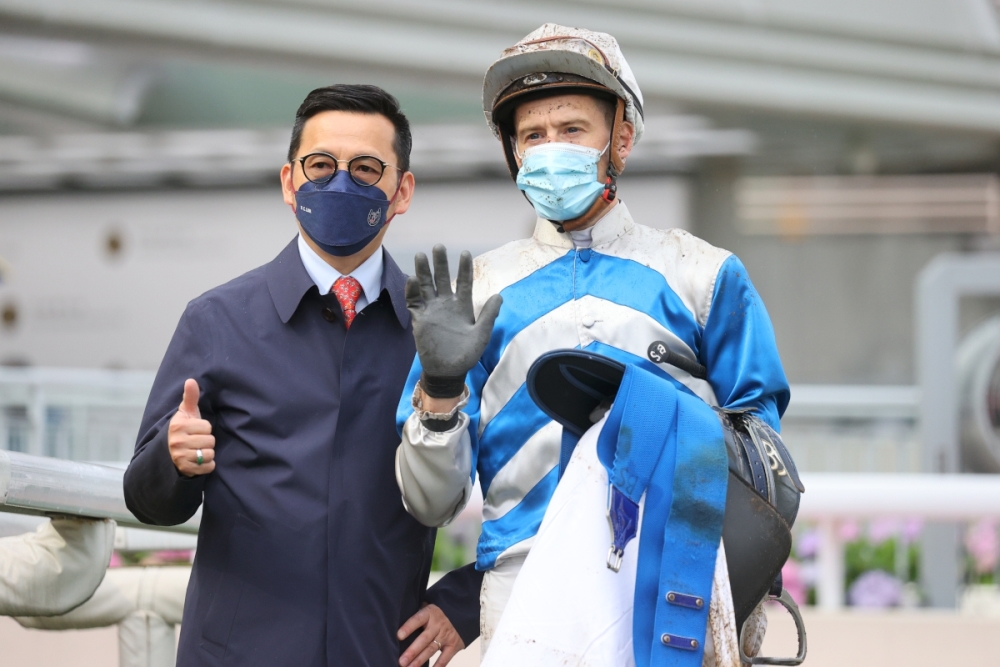 Frankie Lor extended his lead over John Size in the trainers’ championship to 68-65 with a treble featuring Massive Action (大紅袍), Free Foal (逍遙駒) and Sakewin (識贏).

Purton was aboard in Massive Action’s (大紅袍) all-the-way victory in the second section of the Class 4 Monaveen Handicap (1400m) after the Australian combined with David Hayes to land the Class 4 Manicou Handicap (1200m) on Oriental Smoke.

“He’s still green and I think he can still improve,” Lor said of Massive Action (大紅袍) before Blake Shinn piloted Free Foal (逍遙駒) to victory in the first section of the Class 4 Monaveen Handicap (1400m).

Lor completed a fruitful afternoon when Sakewin (識贏) bolted in with the second section of the Game Spirit Handicap (1200m) under Joao Moreira to maintain an unbeaten record after two starts.
Lor will consider Sakewin (識贏) for next season’s Four-Year-Old Classic series.

“He’s not a really big horse, he weighs only 1,080 (pounds). If he gets bigger and stronger, he should be a good horse for next season. He’ll go a bit further.”

Purton completed a treble atop Francis Lui’s Packing Treadmill, impressive winner of the first section of the Class 3 Game Spirit Handicap (1200m), matching Moreira’s three-timer which left the Brazilian with an overall 111-109 lead in the jockeys’ title.

“He (Packing Treadmill (包裝必勝)) flew the gates, so that obviously felt and I felt like I was going to get across easily until everyone, with the track bias in mind wanted to be handy and they kept kicking up, and I had to work more than I wanted to going into the first corner,” Purton said.

“So, for him to be able to do that and then still be able to balance up and have a good kick was nice. He won his first start on a softish track, so I thought he would handle it. He had the light weight (120lb) and he did a good job.”

Circuit Nine’s (電路九號) hollow victory in The Argonaut Plate (1000m) for Griffins delivered Tony Cruz his 50th victory of the season as the impressive grey gelding provided sire Caravaggio with his first Hong Kong winner with his first runner.

Lyle Hewitson continued a searing run of form with a double to tally seven wins in three meetings with success on Douglas Whyte-trained Cheval Valiant (不可擋) in the Class 4 Isle Of Man Handicap (1000m) and then victory on Nicholson Returns (翔龍再現) in the Class 4 Special Cargo Handicap (1600m).

“It’s unbelievable. Just super, super blessed for all the support and just enjoying how things are going, so long may it continue. I’m very grateful for the support I get,” said Hewitson.

Tony Millard pointed to suitable conditions for Nordic Sky (飛天神駒) after the colt reprised his best overseas form with victory in the Class 3 Insular Handicap (2000m) under a clever ride from Antoine Hamelin.

The four-year-old who finished ninth in BMW Hong Kong Derby in March, was unplaced in 11 Hong Kong starts until today’s breakthrough but Millard referenced the import’s best form on wet ground in South America.

“He won the Brazilian Derby in the wet and funnily enough, then he came from the back but this time we decided to go forward,” the South African said. “He’s a Class 3 horse at this stage, he’s got to improve a lot. He’s of the grand weight of 980 pounds.”