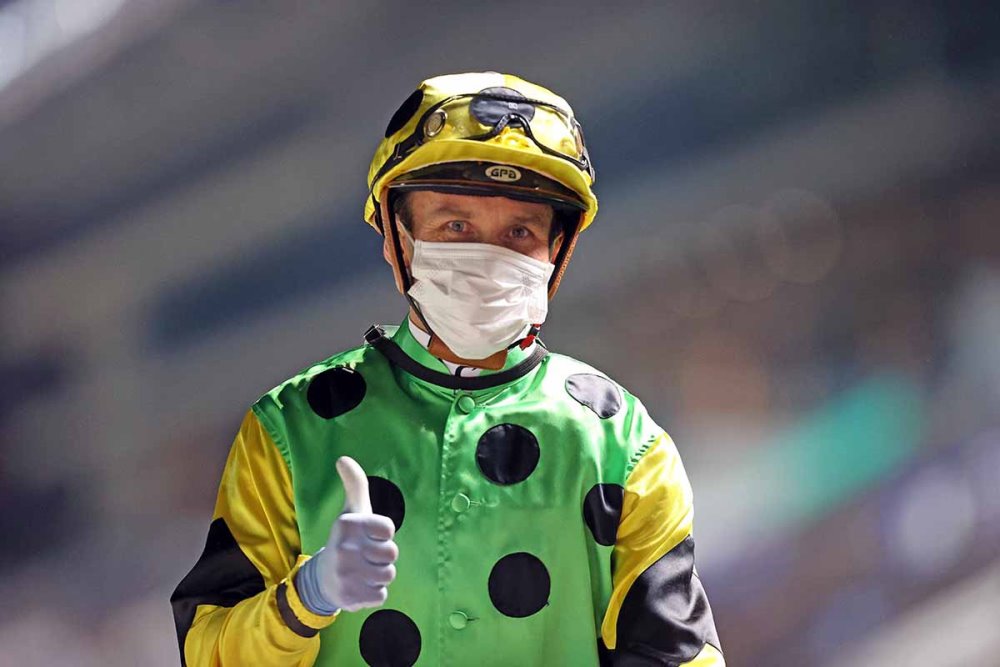 Elated after the latest twist in a rollercoaster debut Hong Kong season, Luke Currie jubilated in a remarkable Sha Tin double for John Size on Wednesday night (4 May) to seal an inspiring return from injury.

“I feel like it’s the biggest race I’ve ever won in my career, I’m that happy. To come back from injury and stay here, it’s been really hard,” Group 1-winning Currie said after Touch Faith’s (當家信心) win, referencing a trial fall in February which left him hospitalised with a fractured vertebra.

Sidelined for 18 meetings after Pride Of Eight’s (八威小子) saddle slipped at Sha Tin on 4 February, the 40-year-old Australian’s mishap contrasted vividly with the perfect start he had made to his Hong Kong stint with victory at his first ride on Miracle Victory (團結必勝) for David Hayes on 30 January.

Out of action until 10 April, Currie then contested 28 races after resuming – and filled the placings on only one occasion before taking the mount on Touch Faith, who was promoted into the field with the scratching of Lumen Baba (星光爸爸).

“You need the luck. It’s a starting block again for something that I hope gets bigger,” Currie said before then combining with 11-time champion trainer Size with Amazing Teens (華卓晴).

Touch Faith (當家信心) prevails in a tight finish for Currie.

“It’s great. I had no expectations. Having a couple of rides for John Size, I was quite excited and hoped they would run well. One of them (Amazing Teens (華卓晴)) wasn’t drawn well (barrier 14) and the other (Touch Faith (當家信心)) was lucky to get a run.

“I definitely didn’t expect to be walking home with two winners. I’ve been back riding for only a month – but a month is a long time in racing without a winner and it does help the mindset a lot. I will get out of bed a lot easier tomorrow morning.”

An animated Size was clearly delighted with Currie’s display aboard Touch Faith (當家信心).

“I know that he’s (Currie) there and he rides 119lb and he’s strong enough for a horse like this and I was looking to give him an opportunity to ride and when I had a look to see who didn’t have a ride, I chose him,” Size said.

“Well, he couldn’t have ridden it any better. It was a beautiful ride. The horse jumped well and that helped but from then on, he had him travelling beautifully in the run. He looked like a winner a long way from home. The second horse (General Trump (東龍陣)) might have just got out of stride and it favoured us.

“He (Touch Faith (當家信心)) hasn’t shown any form on the dirt track but his track work is quite good on it, so when he got into the race and the gate was very nice, we thought he might run well.”
All three of Amazing Teens’ (華卓晴) wins have come on Sha Tin’s all-weather surface.

Tony Cruz carries off with a treble.

“It’s a real privilege, an honour to ride a winner for a legend of Hong Kong racing,” Shinn said. “I haven’t had a lot of rides for Mr Cruz – you could count them on one hand. He always greets me politely at trackwork, but rides are hard to come by.

“You have to work hard and ride well to earn your opportunities. It’s nice to get a ride and reward him with a winner.”

Cruz (53 wins) cemented his grip on third place in the trainers’ championship behind Frankie Lor (68) and Size (67) with a treble, which was crowned by Berlin Tango’s (柏林探戈) success in the Class 2 Yuen Long Handicap (1650m).

A G3 winner at Kempton for Andrew Balding in 2020, the Dansili gelding had contested 15 races in Hong Kong without success until tonight’s breakthrough under a rails-hugging ride by Karis Teetan, who earlier combined with Cruz to win the first section of the Class 4 Nam Sang Wai Handicap (1200m) with veteran Lady First (愛馬劍).

Berlin Tango (柏林探戈) scoots up the inside.

Paul O’Sullivan believes Spontaneous (箭意) has “found his niche” after the gelding made a successful debut on dirt by snaring the second section of the Class 4 Nam Sang Wai Handicap (1200m) under Jerry Chau.

Hong Kong racing continues at Sha Tin on Saturday (7 May).