Ace One (祥勝霸駒) surges to victory.

Feted as the most successful jockey in Hong Kong history, Douglas Whyte will continue to pursue further glories as a trainer after Ace One (祥勝霸駒) provided the South African with his 40th victory of the season by winning the Class 3 Apprentice Jockeys’ School 50th Anniversary Cup Handicap (1200m) at Sha Tin on Sunday (5 June).

Whyte piloted a record 1,813 winners as a rider during a majestic reign crowned by an unparalleled 13 jockeys’ championships in Hong Kong before taking out his trainers’ licence in 2019/20. Having reached 40 wins in a season for the third time in three campaigns, Whyte is now looking to up the ante.

Whyte and Maia have struck up an unlikely partnership with Ace One (祥勝霸駒), who has now triumphed twice under the Brazilian.

“If you see the way he (Maia) rides him, he jumps positively, puts him to sleep, makes him change his legs, gives him a couple of cracks and the horse just fires up. He sits pretty on him, makes him do his work and the horse does his job. They’re a perfect combination.”

Maia, who has 24 wins for the term, said: “I’m very glad that Douglas has given me support with this horse. I’ve won twice on him now. The horse has improved since last time, we had a beautiful draw, we had a nice run and the horse responded very well in the straight. It was an easy win.” 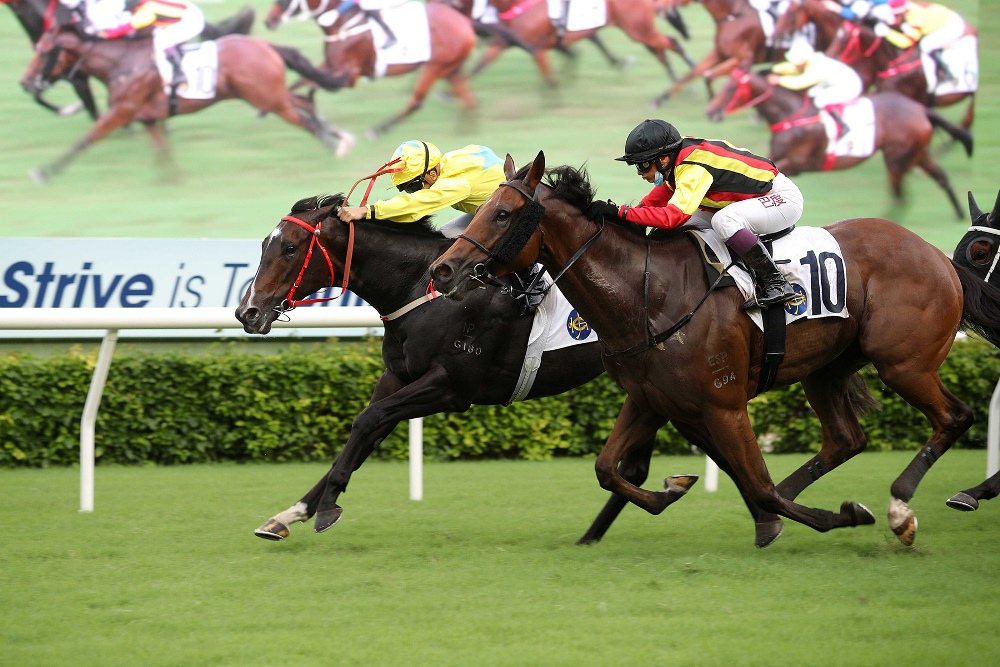 Lucky Sweynesse (金鑽貴人) completed his latest rise in grade with aplomb, winning the Class 2 Beas River Handicap (1400m) for Manfred Man and Matthew Poon to pocket a High Achievement Bonus of HK$1 million in addition to the HK$1.368 million winners’ purse for his connections.

Still only three, Lucky Sweynesse (金鑽貴人) has won four of five starts in his debut season – climbing from Class 4 to Class 2 in the process – and left a strong impression on Poon.

“He’s a young, improving horse and he just needs more racing experience to learn how to settle and he will be an even better horse,” Poon said. “Today, he over-raced a bit and was a little bit green, but going to Class 2 for the first time and 1400m, I think his performance is terrific.”

Paul O’Sullivan, who will move back to New Zealand after 18 seasons at the conclusion of this term, posted a double in a reminder of his enduring quality.

“It’s nice to win a few races on the way out because most people walk out kicking stones,” the amiable Kiwi said after Vagner Borges ended a 108-ride losing streak when Turquoise Alpha (興高采烈) stormed from eighth at 200m mark to deny President’s Choice by a short head to claim the Class 4 Champion Apprentices Handicap (1600m).

Borges was relieved and elated: “You always think positive, work hard and you’re always going to get there. I knew a winner was going to come eventually, because you keep working hard. The horse jumped a little bit slow, he relaxed and he had a good finish. He was strong.”

“It was a very good ride from Zac, he controlled the race and the horse fought really hard. For a young horse, it’s a credit to him,” O’Sullivan said. “He jumped well and got across reasonably cheaply – a good, tough win.”

Tuchel (自勝者強) broke through in style for John Size and Joao Moreira in the second section of the Class 4 To Strive Is To Shine Handicap (1400m), steaming to a two-length margin and clocking 22.33s for the last 400m after jumping from barrier 13.

Contesting his 54th start in Hong Kong, the seven-year-old All Too Hard gelding posted his third win this season over Sha Tin’s 1000m course, clocking 55.11s to push his earnings over HK$10 million after Luke Currie’s positivity from barrier 12 paved the way for Telecom Missile’s (電訊飛彈) victory in the Class 4 Racing Development Board Handicap (1200m, dirt) for Caspar Fownes.

“He’s a funny horse, he’s a bit of a thinker but today he did his job nicely. Luke Currie gave him a beautiful ride, credit goes to him. He was one out, one back – beautiful ride,” Fownes said.

Tony Cruz, who was among the Apprentice Jockeys’ School’s first intake in 1972 posted his 58th win of the campaign when Super Oasis (超級綠洲) claimed the Class 3 Huangcun Sports Training Centre Handicap (1600m) under Alexis Badel.