Zac Purton has cut Joao Moreira’s lead to one win.

The Hong Kong jockeys’ championship hangs in the balance after Zac Purton drew within one win of Joao Moreira with seven meetings left in the season as Derek Leung took riding honours with a double at Happy Valley on Wednesday night (22 June).

On an eventful night, Moreira was stood down from riding after the first race because of health issues and will also be sidelined for the Sha Tin meeting on Saturday (25 June), potentially opening the door for Purton to steal a late-season march in the race for title honours.

The contrasting fortunes of the two four-time Hong Kong champion jockeys was captured in the opening event of the card when Purton ignited his championship charge with victory on Francis Lui’s Run The Table in the Class 5 Cochrane Handicap (1650m) while Moreira finished seventh on Oh Bravo before being stood down.

While Run The Table (信心滿滿) was Purton’s sole winner for the evening as the Australian subsequently filed four minor placings, Moreira missed the chance to mitigate his arch-rival’s gain when one of his original rides – Winning Icey (紫雲冰) – won the second section of the Class 4 Gage Handicap (1200m) under substitute rider Luke Ferraris for Caspar Fownes.

Moreira clings to a slender 127-126 margin over Purton as Leung continues to emerge as a threat to Matthew Chadwick (46) and Vincent Ho (44) in the battle for the Tony Cruz Award for the leading home-grown jockey.

Leung’s brace took his tally to 42 for the season, initially coaxing the best out of Sergeant Pepper (胡椒軍曹) to win the Class 4 Hong Kong Young Industrialists Council 30th Anniversary Cup Handicap (1000m) for Me Tsui, piloting the I Am Invincible gelding to his first victory at his 12th start.

“It was a good win for me, he’s been working well in the morning but he’s so nervous and struggles to relax,” Leung said. “He was more relaxed tonight and I was able to warm him up behind the gates and he was able to save more energy.

“In the race, he did everything perfectly – we had a good start and we had no troubles.”

Leung then sealed his double with Bulletproof’s (海島材子) swooping victory in the Class 4 Graham Handicap (1650m) for Ricky Yiu. Posting his third win over the 1650m trip at Happy Valley, Bulletproof (海島材子) benefited from a patient Leung ride.

“I was put off by the barrier (12), but it was a perfect ride by the jockey,” Yiu said. “He rode him exactly the way he needs to be ridden.”

Fownes sealed a double when Nicconi County (常常有餘) landed the Class 3 Lyndhurst Handicap (1200m), prompting the champion trainer to predict a bright future for the three-year-old.

“He’s a nice, he’s still young, he’s still learning his trade. We’ll put him away for next season and he could be quite an exciting horse for next season,” Fownes said. “I’m pretty confident he’ll get into Class 2. Naturally, you hope they’ll develop and get stronger.” 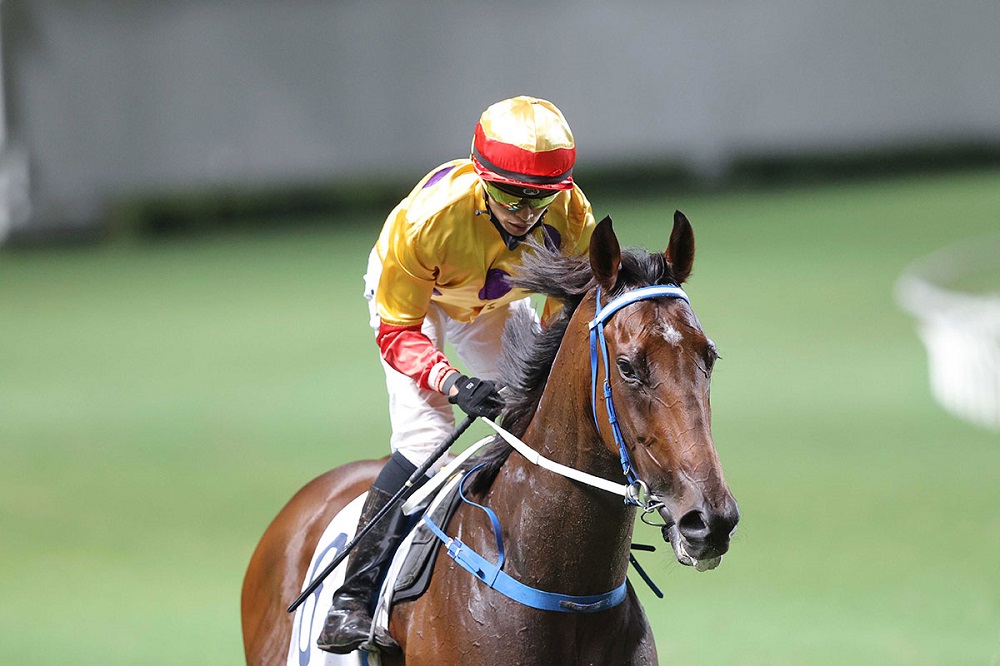 Family Folks brightened a challenging season for Michael Chang with success in the Class 2 Staunton Handicap (1200m), providing the trainer with his 12th victory of the season.

“He can have a good break now. I’ll try to get a few more good horses next season.”

Douglas Whyte and Lyle Hewitson continued a flourishing partnership with Nothing New’s (牽旺加富) front-running victory in the Class 3 Shelley Handicap (1650m). The South African duo has now combined for 16 wins this campaign. Whyte has 41 wins for the season; Hewitson has 21.

“He jumped two lengths faster than everyone today – this horse is very fast,” the Frenchman said. “No-one chased me and I could control the pace, he travelled lovely and, in the home straight, he kicked and I’m happy because he deserved the win.”

Benno Yung-trained Ambitious Heart (正本雄心) proved he had lost none of his competitive zest with victory in the first section of the Class 4 Gage Handicap (1200m) under Matthew Poon.

The eight-year-old posted his sixth win at his 62nd appearance and his fourth over the Happy Valley six-furlong course, having started his career in Hong Kong six years ago.