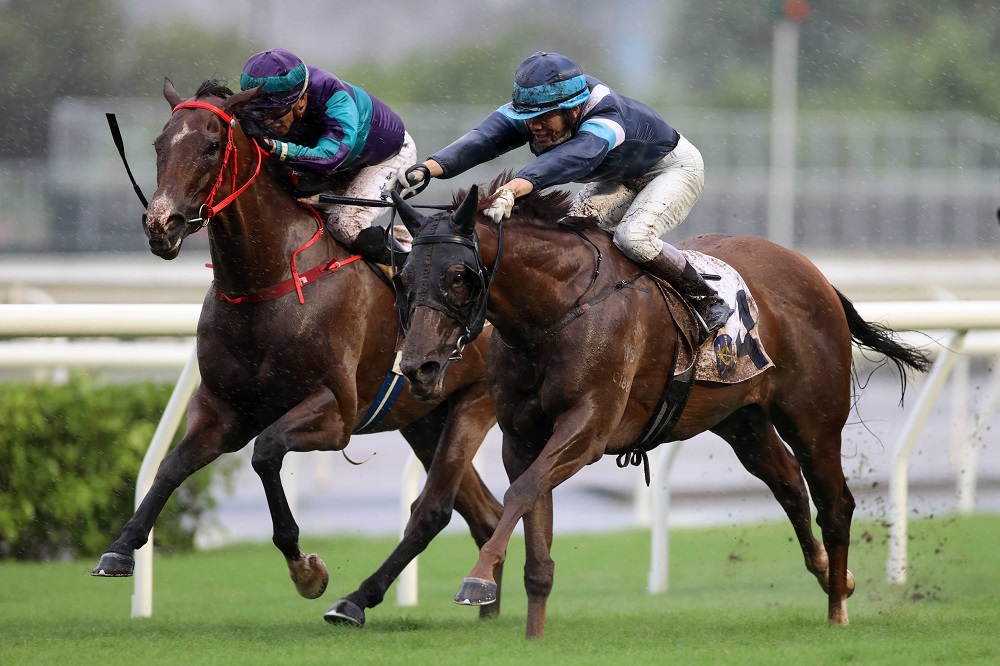 Revelling in the ground, the Duke rules.

O’Sullivan, 62, will leave Hong Kong at the end of the season, having forged an excellent reputation as a Derby-winning trainer since moving to the city from Hong Kong in 2004, subsequently accumulating 515 winners including a string at the highest level.

Surprised by Duke Wai’s (韋小寶) narrow triumph on yielding to soft ground over Winning Dreamer (夢想成金) and Blaze Warrior (風火戰駒), O’Sullivan boosted his season’s haul to 22 wins and his satisfaction at clinching the HK$3.15 million feature was palpable.

“Well, he’s always been very honest and I think the track conditions were in his favour today,” O’Sullivan said of the Per Incanto gelding. “I’ve had him since he was three and he’s been a wonderful old horse for us.

“I think he has got an unflappable temperament and he’s a kind horse in the box. When he’s in a race, he gives 100 percent. He has been a marvellous horse – who knows, he might come back to New Zealand and live in a paddock on the farm?

“It’s wonderful to win for the owners. It’s fabulous, it’s terrific – particularly with this old horse.”

Duke Wai (韋小寶) improved his record to eight wins from 34 starts for prizemoney of HK$14.5 million.

Duke Wai’s (韋小寶) victory also carried significance for Chau, who took his Hong Kong career wins to 95 and, as a result, will have his three-pound claim trimmed to two pounds for the Happy Valley meeting on Wednesday (6 July).

“I’m thankful for the owners’ support and today Duke Wai (韋小寶) started well and, on the turn, he was travelling well, so I decided to move him out and get better ground. He gave me a very good turn of foot. When he took the lead, he slowed down a bit, so I had to keep him up to the line.

“This is the next step and hopefully I can keep it up.”

Matthew Chadwick tightened his grip on the Tony Cruz Award for the most successful home-grown jockey with a treble, registering a half century for the season with M M Johnny’s (美滿將來) victory in the Class 5 Racing Goes On Handicap (1200m) for Manfred Man.

Reaching 50 winners in a season for the second time in 14 campaigns, Chadwick said: “I wasn’t really focusing on that, but I guess it’s good – it’s another winner. The more winners you ride, the better. It’s a good number. I just hope to ride more.”

Chadwick’s ambitions quickly materialised aboard Sea Monarch in the Class 5 Serving The Community (1400m) for Michael Chang before he partnered Leading Fortune (連連行運) to victory for John Size in the Class 3 Sportsmanship Handicap (1600m) to edge closer to his career-high tally of 57 winners in 2012/13.

He extended his lead over Vincent Ho in the Tony Cruz Award to five wins – 52-47 – with four meetings left, as John Size breathed life into the trainers’ championship with a treble to cut Frankie Lor’s buffer to five wins – 88-83.

Peak To Peak (峰爭) bolts in for Ho and Lor.

“It’s really hard to chase from behind today and of course with the light weight (118lb), it’s more of an advantage on this surface. It was a perfect effort and I think the horse even improved on this surface as well,” Ho said.

“He usually can’t sustain a long run but maybe he felt more comfortable in the conditions.”

Size closed the day in ominous fashion with Power Koepp’s (電源之駒) charging victory in the Class 3 Better Future Handicap (1200m) under Alexis Badel to give the Frenchman a double for the 11-time champion, while Zac Purton clings to a 129-128 margin over Joao Moreira in the jockeys’ championship.

Chris So’s faith in Super Sunny Sing (新力高升) was justified when the Nicconi gelding swept to an impressive win in the first section of Class 4 World-Class Leadership Handicap (1200m) under Joao Moreira.

“We weren’t sure about the conditions today, but we think he is a good horse,” So said. “We used a hood on him today to keep him quiet and he had a great ride from Joao and you saw the result.”

“Obviously he enjoyed the track, but he keeps on improving,” Badel said. “Today, the key was being in front but it was a demolition job.”

Formerly trained by Stephen Marsh in New Zealand, Bourbonaire (笑哥兒) won on heavy ground at Matamata and was placed at Group 1 level on yielding ground in 2020 before export to Hong Kong.

Me Tsui and Dylan Mo successfully combined with Sparkling Dolphin (海豚星) to land the Class 4 Continuous Development Handicap (1000m), providing the Tsui with his 19th winner of the season and Mo’s 11th.

Tsui sealed a precious double when Royal Agility (奮鬥齊心) steamed to clear-cut success in the second section of the Class 4 Riding High Together Handicap (1200m) under Lyle Hewitson.