Rising From Ashes (自力更生) delivers at the Valley.

Aiming to recoup supremacy in the championship race, Joao Moreira is hoping for much the same from Rising From Ashes (自力更生) when the speedster lines up in Wednesday’s (6 July) HK$1.57 million Class 3 Drake Handicap (1200m) at Happy Valley.

“I just hope that he can do what he did last start, he won very impressively to indicate that he is up to the class,” Moreira said. “Hopefully we can repeat what we did last start.”

Trailing Zac Purton by one win (128-129) in an enthralling battle to be crowned this season’s Hong Kong Champion Jockey, Moreira held ascendancy since late April before his great rival wrestled it back from him at the end of June, while overall the lead has swapped six times between the pair as they ready for the campaign’s final four meetings.

“Apparently Zac has a better quality of horses than I do and I’m not very optimistic with the quality of rides that I have got (at Happy Valley) but I am very hopeful, so I’m just hoping that we can get some luck.

“However, I have to assume that I am very happy with this season’s result. I have had a lot of personal problems which have affected me but I am extremely happy with how things have gone,” the four-time champion jockey said.

The Francis Lui-trained Rising From Ashes (自力更生) (127lb) is the only last-start victor Moreira hops aboard tomorrow night and he’s chasing back-to-back wins in Class 3 following a nine-point rating-rise as a consequence of his superb win in early June.

“I believe so (more to come), even with the nine (rating) points. He deserved that for the win because it was impressive, which is definitely not going to help because he’s a light framed horse but he feels like that he’s the kind of horse who can rise more than what he is at now – rating wise – and he’s given me the feel in trackwork that he’s in better shape, he’s happier and he’s healthy.

“I can’t see a reason why he can’t go there and perform to a similar level to what he did last start,” Moreira said.

“I galloped him on the grass the other day and I am extremely happy with his condition,” Moreira said.

The Shamus Award gelding arrived in Hong Kong as a one-time winner in Australia when known as Four Leaf Riot. He placed at Flemington behind Foxy Frida in his second run, a subsequent Group 2 runner-up who added a further four wins to her resume.

Among Moreira’s wins this term is a pair of Group 3 scores as well as a HK$20 million G1 LONGINES Hong Kong Vase (2400m) success aboard Japan’s Glory Vase.

Nursing a one-win lead over Moreira, Zac Purton takes just seven rides after the scratching of See U Again (想見你) at the Valley, capped with another of Francis Lui’s emerging talents, Stoltz (勝不驕), in the HK$2.4 million Class 2 Albert Handicap (1000m).

Currently owning the 1000m course record at Happy Valley, Stoltz (勝不驕) steps away from gate eight this time around after downing classy opposition at the end of April.

“It’s a tough ask this time, he’s drawn wide like most of my horses recently and again on Wednesday night, he’s up in weight and he’s in against some fast horses, so he’s up against it – he’s had a good season and he’s honest, so he’ll give us his best,” Purton said. 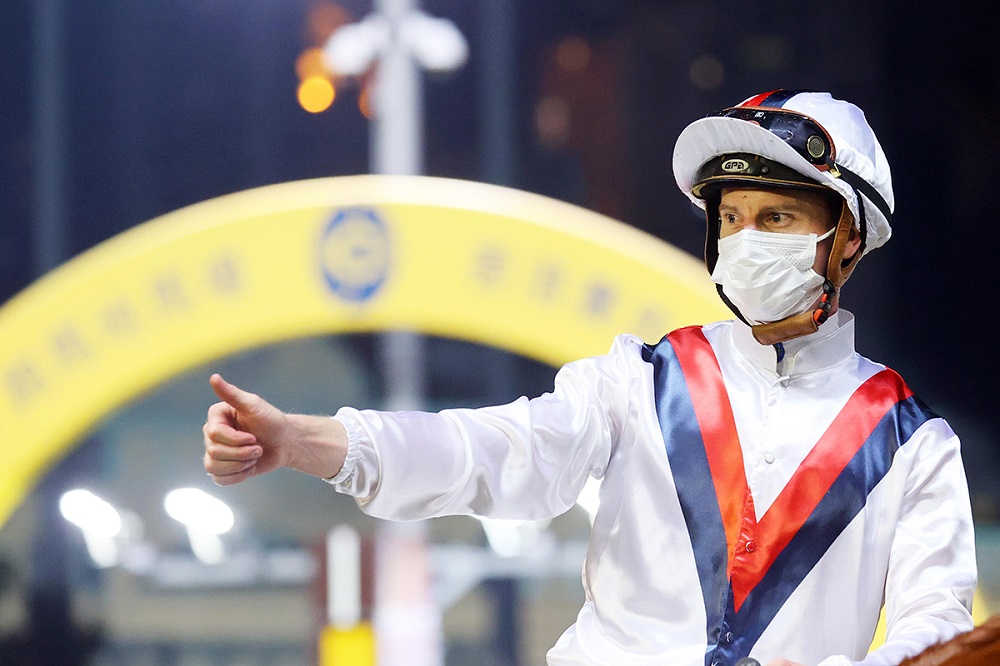 Zac Purton is chasing a fourth win aboard Stoltz (勝不驕).

“His trial was good, he’s going well and there is nothing wrong with him physically so he’s in good form but he’s just drawn a bad gate in this race.

“The form around him is fine but like all races at the Valley you need to draw the right gate and get the right run, it’s hard to see that happening here,” Purton said.

Earlier in the HK$1.04 million Class 4 Lung Wui Handicap (1650m), Douglas Whyte is chasing a first win with Big Two (贏盡天下) after the bay was withdrawn from his most recent engagement in the saddling stalls prior to the race.

“Just before we went to the start, we were saddling him up and he got a bit restless and kicked the walls, so he sustained a cut above his hock and on veterinary advice he was withdrawn,” Whyte said.

Since then, Whyte has been pleased with the 51-rater’s efforts in training as he looks to snap an exasperating run of near misses this season.

“He’s done nothing wrong in his last couple of races and he’s probably been the victim of circumstances with poor gates and a few luckless runs but the horse himself has held his form and it’s been a while between runs but I have given him a trial to just let him have a hit out and he remains in a healthy condition,” Whyte said.

Big Two (贏盡天下) has run second three times this campaign and come within a length of winning on four occasions.

Wednesday’s (6 July) nine-race fixture at Happy Valley kicks off at 6.45pm with the second section of the Class 5 Tim Mei Handicap (1650m).