Faced with a monumental challenge to overtake Matthew Chadwick and Vincent Ho in the race for the Tony Cruz Award as Hong Kong’s most successful home-grown jockey for the 2021/22 season, Derek Leung refuses to concede the battle is lost after a treble at Sha Tin on Sunday (10 July).

Trailing Chadwick (54) and Vincent Ho (49) with 47 wins – having comfortably surpassed his previous best haul of 39 wins in a campaign – Leung has only 20 races and two meetings left in the season to make further inroads.

On a day when the contest for the jockeys’ and trainers’ championships were largely unchanged with Zac Purton and Joao Moreira both riding a winner each to maintain the status quo at 132-130 and Frankie Lor (90) and John Size (84) failing to add to their totals, Leung is hoping for a miracle.

Leung scored on Chicken Dance (閃電俠) for Paul O’Sullivan, Woodfire Bro (木火兄弟) for Peter Ho and All Riches (大勢至富) for Ricky Yiu, who shared training honours on the card with Tony Cruz.

For all of Leung’s gains, Chadwick’s victory on Cruz’s talented Beauty Charge (美麗奔馳) in the Class 3 Stevenson Cup Handicap (1200m) means Ho and Leung – who both retain mathematical chances of Tony Cruz Award victory – face a monumental task with opportunities dwindling ahead of the Saturday, 16 July season finale.

“Definitely, for sure,” Cruz responded when asked if the Havana Gold three-year-old would tackle the series.

“He’s definitely an improving horse as you can see. He had only two starts overseas and this is only his second start in Hong Kong and he’s definitely improved from his first start.

“I’ve got high expectations of this horse and I expected him to perform today and the public all knew exactly how good this horse is.”

“He’s a nice horse. He gives the impression he can step up in distance. When he came to me, he was bulky and a bit fat but he’s always shown nice ability,” Lui said.

Formerly known as Magnanimous when trained to three wins in Ireland, including Listed success at Leopardstown in June, 2021, by Joseph O’Brien, Circuit Stellar (綫路之星) impressed Ferraris with his resolve when challenged by Keefy (瑪瑙). 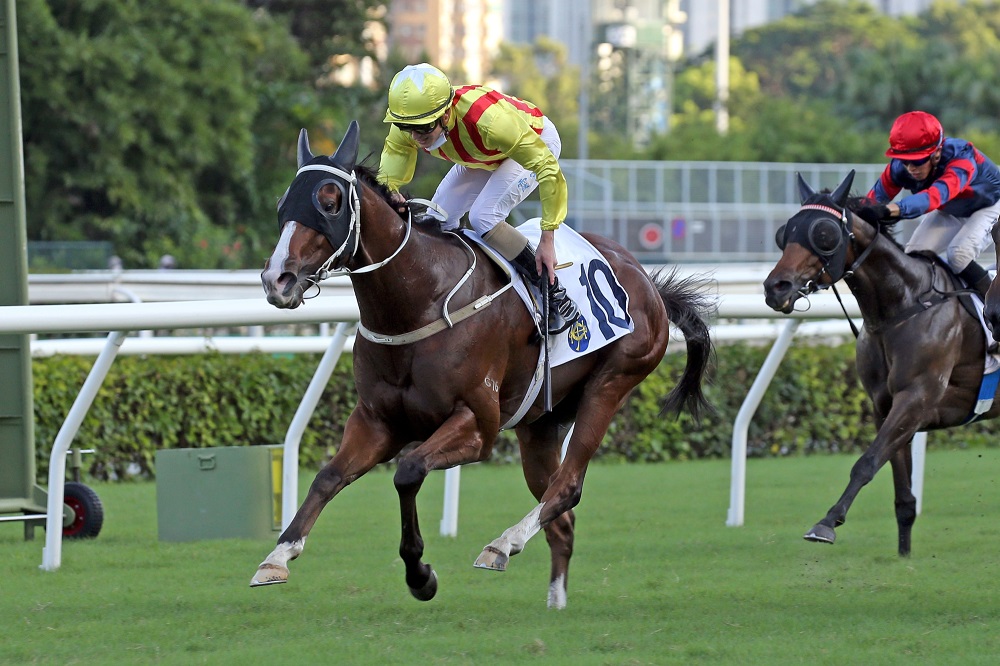 Circuit Stellar (綫路之星) is in for the fight.

“He had the run of the race and as we peeled into the straight, he got a split between runners and he fought to the line – a win full of merit,” Ferraris said. “He really enjoyed the fight and he relished the style of running, so going forward he’s got options.

“Mr Cruz has been hugely instrumental, so all credit to him and his team.”

Ricky Yiu matched Cruz’s effort to slot a double, teaming with Leung and All Riches (大勢至富) in the Class 4 Chan Trophy Handicap (1400m) and Lyle Hewitson and Jolly Ruler (旌鷹) in the Class 3 Ip Jug Handicap (1200m, dirt). All Riches’ (大勢至富) triumph catapulted 2019/20 champion Yiu to the 50-win mark for the season.

“I was hoping to get one before the end of the season – I was hoping to get a few – but he’s probably the first horse that I’ve ridden here that’s started favourite. They’re all hard races to win, but it’s important to win on those horses,” Currie said.

While Currie is looking to a family reunion in Australia before returning to Hong Kong for the 2022/23 season, Chang posted his 16th victory for the current term.

“This horse deserved to win in Class 4. His rating had dropped a lot. He had a little break and we started from scratch again and brought him up slowly. His best performances have been on dirt, he had a good gate and it wasn’t a strong field – so he deserved to win,” Chang said.

“He probably hasn’t performed as we thought he would but today the sting is out of the track and he got his chance and took advantage of it,” O’Sullivan said.