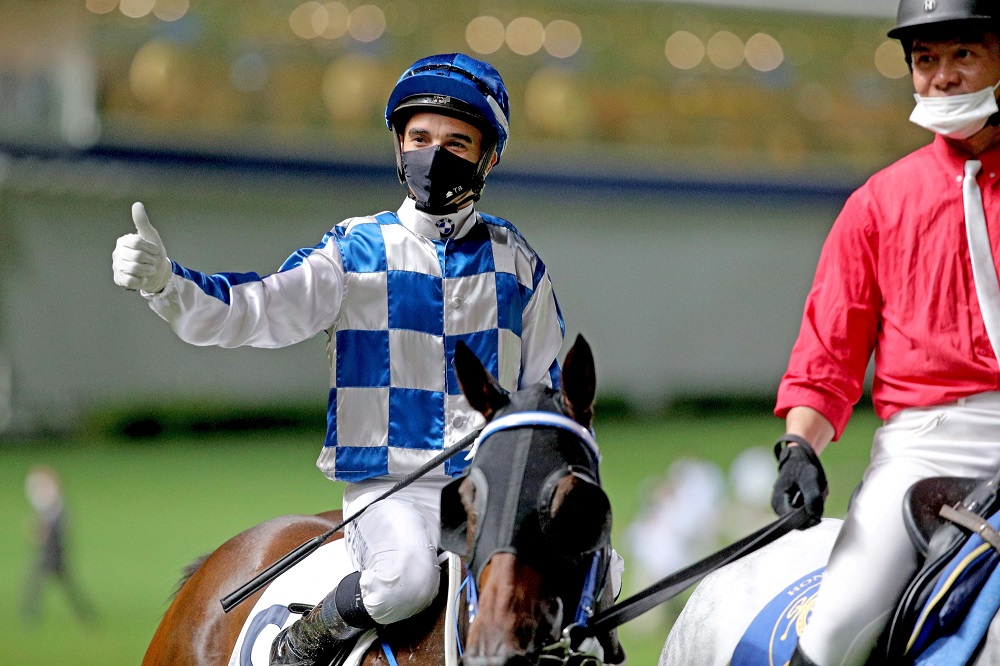 Joao Moreira is on the charge.

The battle for the Hong Kong jockeys’ championship is set for a dramatic conclusion at the season finale at Sha Tin on Saturday (16 July) with the smallest possible margin separating arch-rivals and four-time champions Zac Purton and Joao Moreira.

After 87 meetings and 825 races, Purton and Moreira have both ridden 132 winners but Moreira’s tally contains two dead-heats to Purton’s one dead-heat, leaving the Australian with the narrowest buffer ahead of Saturday’s 11-race card.

The defending champion made crucial inroads at Happy Valley with two wins, two seconds and a pair of thirds, while Purton endured a frustrating evening with three seconds and a third from nine mounts.

“It’s been a good night, good results, nice wins and getting all of us excited for Saturday,” Moreira beamed post-meeting.

The Brazilian fired the opening salvo when his rails-hugging ride on Amazing Boy (勁叻仔) from barrier one delivered victory in the Class 5 Ventris Handicap (2200m) for Michael Chang, while Purton was second aboard Victorious Seeker.

With the trainers’ championship still heavily tilted 90-84 in Frankie Lor’s favour over 11-time champion John Size, Lor is poised to lift the title for the first time in only his fifth season, while Matthew Chadwick is favoured to land the Tony Cruz Award for the most successful home-grown jockey.

Chadwick (55 wins) cemented his lead over Vincent Ho (50) with a winner for Cruz himself, the four-time champion jockey and dual champion trainer after whom the award is named.

“Matthew Chadwick was my apprentice and I believe he will win this award,” Cruz said after Super Oasis (超級綠洲) scrambled to victory in the Class 3 Oi Kwan Handicap (1800m). “It would be great to see Matthew win the award. He, along with Vincent Ho and Derek Leung, are doing a great job.”

Ho retains a mathematical chance of retaining the title after bring up his half-century of winners for the season when Ricky Yiu-trained Fabulous Eight (Fabulous Eight) denied Purton’s Vamos (特攻) in the Class 4 Broadwood Handicap (1000m).

Reflecting on his chances of claiming the Tony Cruz Award for a fourth consecutive season, Ho said: “It will be very difficult, but let’s see.”

Peter Ho took training honours at the final Happy Valley meeting of the season and, with 14 wins for the campaign, is upbeat over Packing Award’s (包裝大獎) future after the Shamus Award gelding secured a High Achievement Bonus of HK$1 million by winning the Class 2 Wong Nai Chung Handicap (1650m) under Matthew Poon, who also celebrated a brace.

“The horse should have a good holiday now because he’s a fighter,” Ho said. “He loves racing, he’s got a big engine and every trainer would love to train him. If I could have two more of this kind of horse, I think I would get a good end result. It’s not easy to get a winner, but you still have to try.”

Yeung, 34, suffered multiple fractures in his right foot when riding Jumbo Goal (金進) at Happy Valley on 27 April and feared he might be sidelined for the rest of the season.

“It was unexpected,” Yeung said of his first win since Reve Parisien’s (夢巴黎) success at Sha Tin on 24 April. “This win means a lot. To be honest, I was struggling a bit because a few weeks back I was choosing between coming back and riding again before the end of the season or taking a break.

“I decided to come out and participate for the last few meetings and I’m grateful for all the help I had from the Club with physiotherapy and nutrition advice. It was a big help.

“The foot is fully recovered now and it happened a lot quicker than I expected. I had a three-point fracture and one of fracture point was where I step on the irons, so I was expecting to be off for longer than three months.”

Lyle Hewitson extended a remarkable Happy Valley streak with success atop Douglas Whyte-trained Our Lucky Glory (多利神駒) in the Class 3 Sports Road Handicap. Hewitson, who has 26 wins this term, has produced at least one winner at each of the past nine Happy Valley meetings.

Manfred Man registered his 33rd win of the campaign when Hero Star (喜駿之星) triumphed under Matthew Poon in the first section of the Class 4 Sung Tak Handicap (1200m), while Luke Ferraris continued a strong finish to the season with a fourth win from the past seven meetings with victory aboard Richard Gibson-trained Carry The Diamond (吉利大勝) in the Class 5 Link Handicap (1000m).