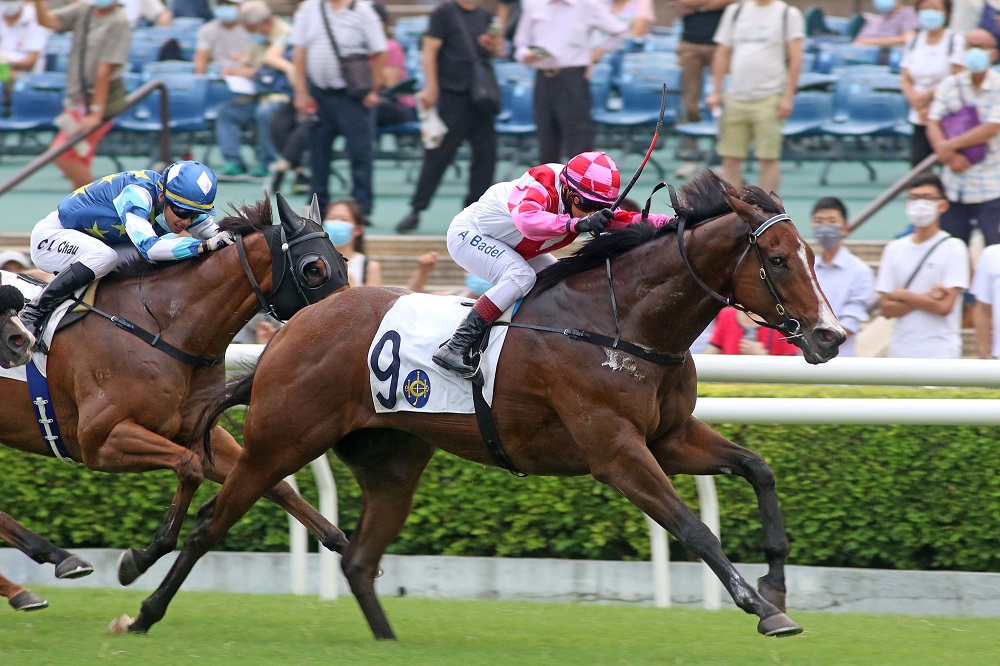 Super Wealthy is a five-time winner in Hong Kong.

The first of 88 fixtures for the new season is headlined by the traditional HK$3.465 million feature – a hotly contested race – with entries released on Monday (5 September) and are expected to feature the likes of Sky Field, Lucky Sweynesse, Trillion Win and Winning Dreamer.

Victorious first-up last season, Super Wealthy returns for Hayes off the back of a pair of trials at Conghua and Sha Tin as well as minor surgery at the end of May.

“He’s a very good Sha Tin, 1200 metre horse. He’s always competed well at the top-level and he’s probably been a length off the best,” Hayes said. “He had a growth on his jaw, it was more cosmetic, it drove me crazy and we basically cut it off.”

“We backed off him last season with this race in mind. It looks like it’s going to be a good version of the race with the likes of Sky Field and a few others in it.

“His trial yesterday (Friday, 2 September) was fair I thought, it was more about getting him to relax as opposed to testing him which we’ll do next week,” Hayes said.

“He beat Sky Field in the National Day Cup, he had no weight and since then he’s risen to (a rating of) 114, so it’ll probably be a little bit harder with the weight but there’s no doubt that he’s a proven upper class horse,” Hayes said.

Speaking at Sha Tin this morning (Saturday, 3 September), Hayes watched on as his trio – featuring Lucky With You – stepped out for the first barrier trials on turf ahead of the new season.

Catching the eye with a surging first-past-the-post effort down the straight, Lucky With You  clocked 58.31s under Karis Teetan – much to the delight of Hayes.

“He looks like he’s come back and improved. I would be expecting him to perform well early on in the season,” Hayes said.

Rated 92, Lucky With You was one of last season’s sharpest improvers with a trio of wins and a 30-point rating-rise after kicking off last term on a mark of 62.

“He’s a horse who we have worked out how to ride, you can’t push him in the early part of races and if you don’t he’ll give you a lot at the end,” Hayes said.

A five-year-old by Artie Schiller, Lucky With You has had two trials (including this morning’s effort) ahead of his return. The gelding crossed the line first on turf at the end of last month at Conghua, clocking 46.26s for 800m.

“He’ll return either on the 18th (of September) over 1000 metres down the straight – I thought I would try him down there – or there’s another race a week later over 1200 metres.

“I think we’ll probably go for the 1000 metres, he looked like he liked the straight to me there,” Hayes said.

Lucky With You sizzles at Sha Tin this morning.

Hayes indicated that Nervous Witness’ return will be delayed following a bout of colic which required surgery in the off season and he is expected to be ready now by around Christmas time, while Fantastic Treasure is likely to reappear at the end of this month.

The winner of over 500 races in Hong Kong, Hayes has armed himself with a fresh-faced team ahead of the coming season which includes Straight Arron and Bon’s A Pearla – both 2023 Four-Year-Old Classic Series potentials.

Bon’s A Pearla is a four-year-old bay filly who arrives in Hong Kong as a two-time winner in Australia having claimed the 2021 G2 Thousand Guineas Prelude (1400m) at Caulfield. She also placed in the 2022 G1 Australian Guineas (1600m) at Flemington, finishing just over a length behind the classy Hitotsu.

“I’ll be watching the form out of those races in Australia closely but her third behind Hitotsu was outstanding, that’s what caught my eye, she had a tough run and I think if you reverse the run she might have won, she’s pretty good on her day,” Hayes said.

The beginning of her career in Hong Kong has been limited to just trotting but Hayes expects to ramp up her preparation next week.

“I haven’t been able to get her on the track, she had a foot abscess in her hind foot but we’ll probably start working her from next week,” Hayes said.

Hayes has enjoyed considerable success in the past with fillies in Hong Kong, having trained Elegant Fashion to land the first Classic since Corvette in 1976 with her victory in the 2003 Hong Kong Derby. She also savoured the 2003 International Cup Trial and 2004 Chairman’s Trophy.

“You don’t want a small filly here. I think if you get one (filly or mare) that’s a decent size, which means they eat well and they’re big (it is ideal).

“I probably had the best of them all with Elegant Fashion, she was a big thumping mare that ate all of her food,” Hayes said.

At both Sha Tin’s (Sunday, 11 September) and Happy Valley’s (Wednesday, 14 September) season-opening fixtures there will be Triple Trio and Six Win Bonus’ up for grabs with a colossal HK$88 million spread across the two meetings.