Angus Chung extended Hong Kong’s recent chapter of breakthrough success, delivering on the reputation he built during a successful Australian stint when partnering David Hall’s Quadruple Double to victory in the first section of the of Class 4 Bedford Handicap (1200m, dirt) at Sha Tin on Sunday (18 September).

Four days after Pierre Ng trained his maiden Hong Kong winner, Chung employed his 10-pound claim to maximum effect as Quadruple Double, who eventually carried 125lb, fended off Lucky Ruby and Thunderstrike after coming under pressure in the straight.

“It feels amazing. That was my first win in Hong Kong,” Chung, 26, said.  “That race was not my ideal. I tried to travel the horse as soon as I can. The horse rolled very well and he did a very good job. I’m so happy right now.”

Chung rode 76 winners from 689 mounts in Australia where his burgeoning horsemanship prompted O’Connor to recommend the apprentice’s skills to Hong Kong trainers, including Hall.

“They all wrapped him big time in Adelaide,” Hall said. “Jon O’Connor said ‘See if you can get your hands on this boy, he’s very good’. He’s certainly good off the track. I’ve been impressed with his attitude and the way he’s handled things.

“He (Quadruple Double) was the perfect horse to put him on. It’s nice to get him on the board. He’s been a good horse for the stable. He’s won five. It just got a bit difficult for him at the rating and then he felt the tracks a little bit and been unsound for a while. Back on the dirt now, it’s good just to pinch that one.”

Overshadowed on the day by the trebles of Zac Purton and Karis Teetan, Chung understands – that as competitive as Australian riding is – Hong Kong represents a steep learning curve as he continues his education under Tony Cruz.

“In Hong Kong, they race to take a tactical position. In Adelaide, they’re soft and slow. So, I have to remind myself to get a position first. That’s the big difference between Adelaide and Hong Kong,” he said, while also citing Purton’s intimidating presence.

“He (Purton) definitely is a good, successful jockey. I can feel his strength and how smart he is. I’m lucky racing with good people, good jockeys. The competition will make me improve a lot.

“I thought I didn’t do too bad on the first day. I made a couple of mistakes, but I’ll learn from my mistakes.”

Zac Purton drives Lucky With You to victory.

“It was a good effort,” Purton said of Lucky With You. “It was his first run of the season, he was out on his feet at the 300m. He had to dig deep – he did that – and then he obviously ran out of puff. He’ll come on from that.”

Speaking from London, Hayes said: “I think for sure he’s better at 1200m – with cover 1200m is his go. I know he fell in but I think he can be Group class ridden with cover.”

Adding to a treble at the season-opening meeting on 11 September and another victory at Happy Valley on 14 September, Purton sprang back into action with devastating effect this afternoon.

“Zac is riding really well,” Yiu said. “The winning margin (three and a half lengths) was amazing, but the jockey is fit and eager and the horses are running for him.”

Yiu completed an excellent day with a double to move to the top of the trainers’ championship with four wins for the season after Mr Ascendency’s triumph in the Class 3 Hing Wah Handicap (1400m) under Silvestre de Sousa.

Purton’s feat was matched by Karis Teetan, who capped a memorable day with success on Hayes-trained Setanta in the CMA 88th Anniversary Cup Handicap (1200m) with a rails-hugging display aboard the Australian import who had won at Listed level in Queensland for Tony Gollan in 2021.

“My instruction was just to leave him alone, to save ground if we could and this horse has ability and Mr Hayes had him in a good shape today,” Teetan said. 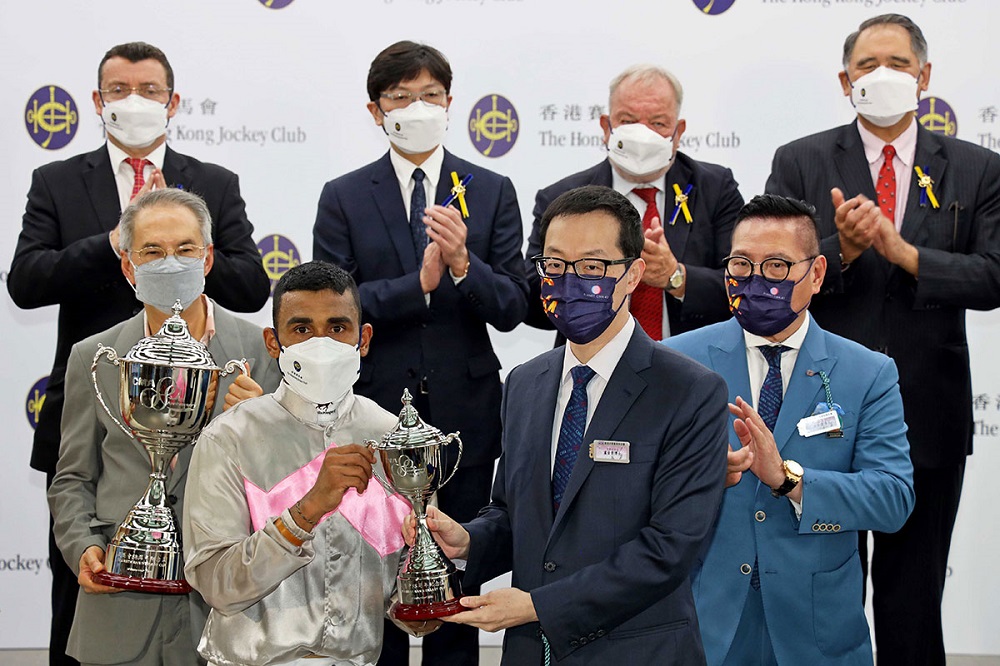 “It’s only the start of the season but things are going okay. Just need to keep working hard to get the good rides.”

Chris So and Vincent Ho combined with Super Win Dragon to snare the Class 3 Fat Tseung Handicap (1200m, dirt) while Benno Yung was delighted with Chiu Chow Brother’s win in the second section of the Class 5 Cheong Wan Handicap (1400m).

“He did everything perfectly today, he got a good position and a lovely speed,” Yung said. “He was fresh and he had a good ride.”