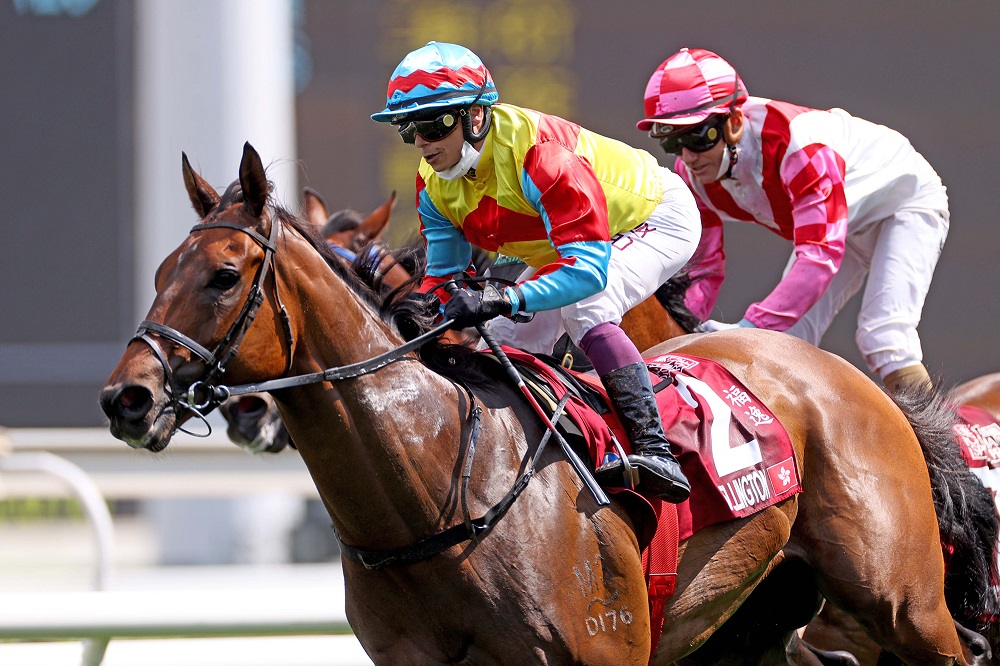 Wellington is a three-time Group 1 winner in Hong Kong.

“Yes, it was (very impressive). I came from far behind and the horse hit the line very strongly, he was very concentrated and he ran a very good trial,” Badel said.

Roughly 10 lengths off the leading horse upon turning for home, Wellington let rip late under the Frenchman, picking off rivals one-by-one this morning to cross the line in second position behind Reve Parisien who clocked 1m 09.93s for the effort.

Ahead of this morning’s trial, Wellington was full of himself – buzzing in Sha Tin’s sand ring as Badel linked with last season’s Hong Kong Champion Sprinter (2021/22).

“He’s always a bit funny when he’s fresh at the beginning of the season – I’m always very cautious because he can spin around very quickly,” Badel said.

Wellington surges under Badel at Sha Tin this morning.

“It’s hard to say (if he has shown more improvement) because he has a lot of personality, he’s not giving everything in the mornings so it’s hard to judge but he was very impressive last season during his races, so hopefully he can be at least as good as he was last season,” Badel said.

“He’s been a great horse to me, I mean, he constantly pushes the limit. Every time we think that he has done his best he just keeps trying very hard, he’s such a genuine and honest horse, I think he should try very hard again,” Badel said.

Tourbillon Diamond is trained by Danny Shum and has banked HK$18.58 million for his connections.

“He’s a brilliant racehorse, he tries very hard. I think the race will be difficult but I know I can count on him,” Badel said.

Returning from a two-meeting suspension on Wednesday night (12 October) at Happy Valley, Badel takes eight rides out of a possible nine including Everyone’s Delight in the Class 2 Man Yiu Handicap (1650m).

“He used to run well fresh, I think, and he likes the track. He has a good draw and his trials have seemed good enough – I think he’s going to run a decent race,” Badel said.

Everyone’s Delight is one of two from trainer Frankie Lor in the race, who also saddles Fa Fa.

“He (Fa Fa) had his first start, finishing third and after that run he has improved. I think he has a very good chance (tomorrow night),” Lor said. “Usually after his first-up run he improves.”

Everyone’s Delight wins for Badel in May, 2022.

Everyone’s Delight has drawn gate one and is a strong chance to take up the running tomorrow night.

Later on the card, Badel teams with the John Size-trained Touch Faith in the second section of the Class 4 Finance Street Handicap (1200m).

“He won quite well in Class 5 and he stepped up to Class 4 at the end of last season and he had a tough run but the horse was comfortable and he hit the line quite strongly, so I’m confident he should be improving enough to run a good race,” Badel said.

“I think so (to being competitive), it was a tough run last time and he (Touch Faith) did a good job, so hopefully he can repeat that performance with a smoother and easier run for him,” Badel said.

Wednesday’s (12 October) nine-race fixture at Happy Valley kicks off at 6.45pm with the second section of the Class 5 Pottinger Handicap (1000m).