“California Spangle’s won the race comfortably today but if he’s going to go up against Golden Sixty, he probably wants to go a little bit better than he has today but it was still a very good performance, he carried a bit of weight (133lb), so let’s see when we get to next start and we get a little bit of an allowance off him (Golden Sixty) and then the big day will be in December,” said Purton, who has won all three of Hong Kong’s Group races so far this season.

“It’s very exciting. Golden Sixty has been our champ for a few seasons now and he is (champion) for a reason – he doesn’t lose very often – and he beat us last time we measured up against him. I think he’s still probably got the edge on us, but we’re improving and we look forward to the battle.”

Unchallenged in front, California Spangle ultimately had a length and a half to spare over Tourbillon Diamond to post his eighth victory in 12 starts.

“I don’t think he could have had it any easier than what he did. He began very well from the outside gate and I didn’t ask him at all to go forward and get across because I wanted to take my time and try and get him to switch off that little bit more in the mid-part of his race and that worked. He really switched off well today, so he had the race under his control the whole way,” Purton said.

“I was very comfortable the whole race and I would have been quite disappointed if he didn’t win today with the run that he had but he’s got the job done, he did what he had to do and he’s going to continue to progress, I think. He’s a very exciting horse, a horse that I’ve been looking forward to and let’s just hope he can find that little bit more that’s required and make it really competitive.”

Cruz believes the BMW Hong Kong Derby runner-up has progressed in the off-season.

“This time he’s a much more professional horse. He’s waiting on the jockey to ask him to go, which is fantastic. He’s still the fastest around, and he can dictate the race,” Cruz said. “Zac rode the horse with pure confidence. This is the way to ride the horse. This is where good jockeys can improve the horse because the jockey matches the horse.”

“Sweet Encounter ran well, he just repeated his first start, which is hard to do. It looks like he’s got a good future. His manners are good, he’s got a good temperament. He seems to understand racing now, so he’s going to be a nice horse to deal with,” Size said.

“Fantastic Way has been a bit unlucky in some races. Today, he was gifted the perfect passage and Alexis waited to help him finish the race off and he got away with it.” 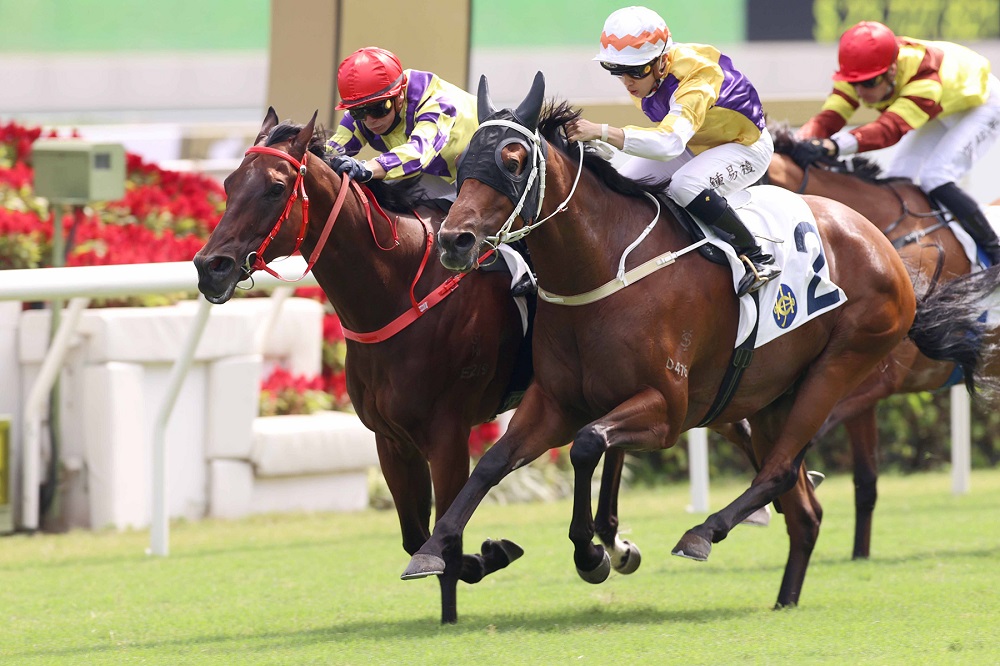 Fantastic Way (inside) holds on for Size and Badel.

S J Tourbillon landed a HK$1 million PP Bonus for his owners with a narrow victory in the H. Moser & CIE. Excellent Handicap (1800m) after scrambling to a nose margin under Lyle Hewitson for trainer Douglas Whyte.

Formerly prepared by Aidan O’Brien in Ireland where he was a two-year-old maiden winner before finishing second in the 2021 G3 Hampton Stakes (1993m) at Royal Ascot, S J Tourbillon had placed only once in 11 starts since export to Hong Kong.

De Sousa consolidated a strong start to the season by completing a brace aboard Pierre Ng’s Stunning Impact in the Class 4 Grand Seiko Excellent Handicap.

Danny Shum’s decision to quickly back up Regency Master after the gelding’s third placing behind London Luckystar at Happy Valley on Wednesday night (12 October) was rewarded with victory in the Class 5 Piaget Excellent Handicap (2000m) before Jerry Chau produced a wonderful ride on Happy Daily to snare the Class 3 IWC Schaffhausen Excellent Handicap (1400m) for Peter Ho.