They came to bow down to the old king and left saluting a powerful new prince of Hong Kong racing as Romantic Warrior left a high-class global field trailing in his wake at Sha Tin this afternoon (Sunday, 11 December) with a thunderous performance in the HK$34 million G1 LONGINES Hong Kong Cup (2000m).

Hong Kong racing’s biggest crowd since the corresponding day in 2019 gave dual Horse of the Year (2020/21 & 2021/22) Golden Sixty a glowing reception despite his failure to wear down California Spangle in the HK$30 million G1 LONGINES Hong Kong Mile (1600m).

However, Danny Shum’s gelding banished any sense of anti-climax with a devastating success that left his rider James McDonald saying that “he’s got everything a good horse needs and he’s got it in spades.”

McDonald had been asked to take the ride on Danny Shum’s gelding once it became clear that Karis Teetan would not recover in time to resume the relationship with the muscular son of Acclamation in last month’s G2 BOCHK Jockey Club Cup (2000m).

The Kiwi marked the greatest year of his career when receiving the LONGINES World’s Best Jockey Award at a glittering Gala Dinner on Friday (9 December) and the 30-year-old ace has no doubt that Romantic Warrior compares well with any of the elite global performers who have carried him to the peak of his profession.

“This horse has a lot of great attributes but his greatest is that he’s so adaptable at taking a position,” he said. “

“I promise you, that was really as good as it looked,” he said. “He was perfect from start to finish today and he’s right up there with any of the other really good ones I’ve ridden, don’t worry about that.”

If McDonald was always confident then the same could also be said of the winning trainer, who stood quietly in a covered corner of the weighing in area as a field of twelve including five Japanese raiders and Irish hope Order Of Australia jumped from the gates.

Shum didn’t bat an eyelid as the freewheeling Panthalassa edged across his charge to take the lead running into the first bend and cast his eyes up and down from race card to television screen as the G1 Tenno Sho Autumn (2000m) runner-up took the field through solid early fractions of 25.34s, 23.53s and 23.51s.

Content to settle back into sixth as Ka Ying Star and Money Catcher pressed the leader passing halfway, McDonald asked Romantic Warrior to improve on the outer rounding the home turn and Shum took a deep breath and moved his multi coloured glasses to the top of his forehead.

And then, as Romantic Warrior loomed up to challenge with just over 300m to run, the winning trainer finally let his pent-up emotions bubble to the surface.

A deep-throated “Good Boy” rang around the side of the Sha Tin stand as McDonald asked his mount to deliver the killer blow and Romantic Warrior didn’t hesitate for a second, powering four and a half lengths clear take over from globetrotting French star Jim And Tonic (1999) as the widest margin winner in LONGINES Hong Kong Cup history in a winning time of 1m 59.70s. 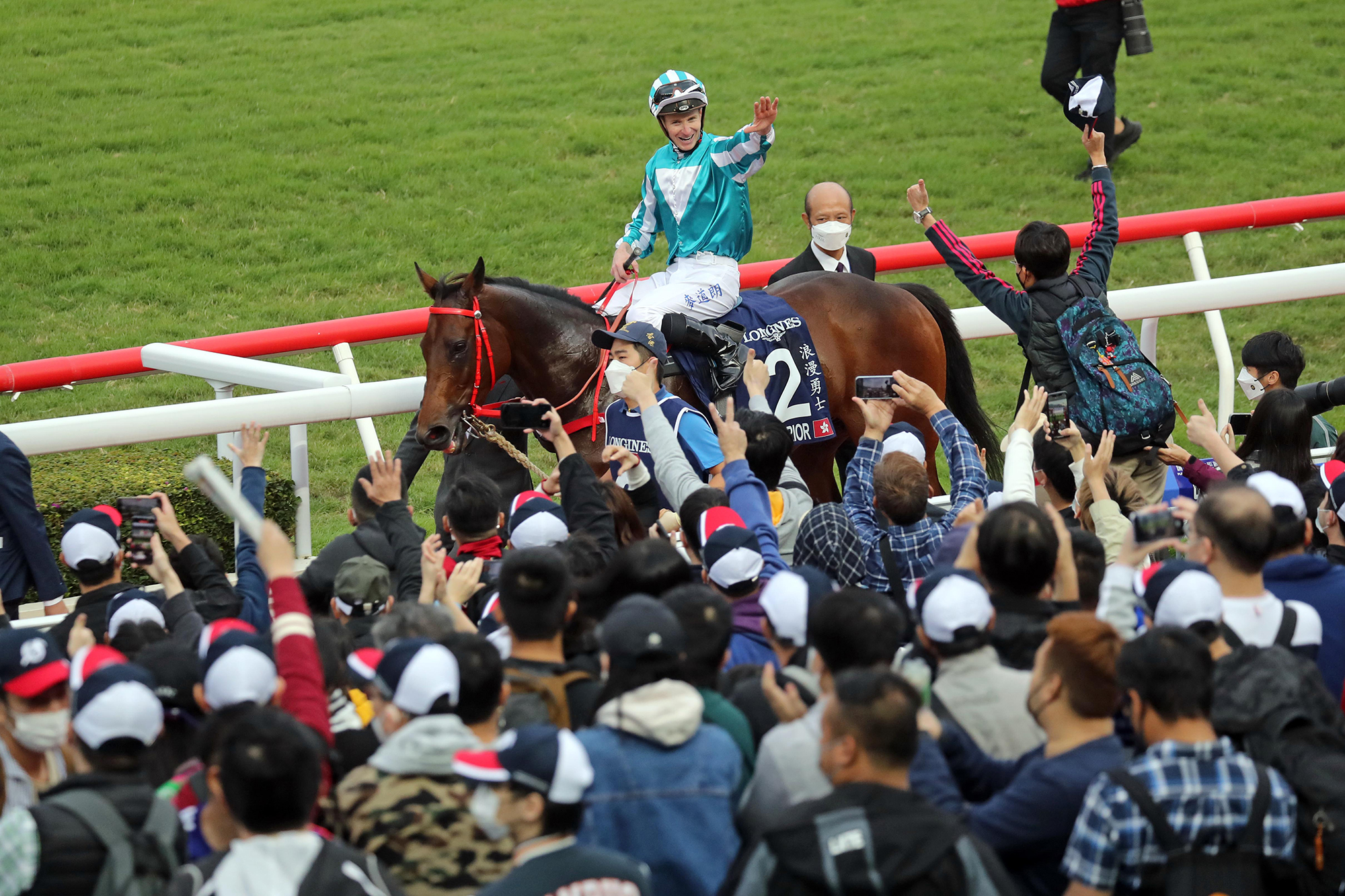 James McDonald waves to the crowd.

Danon The Kid stayed on willingly to fare best of the Japanese quintet in second with Money Catcher, Tourbillon Diamond and Russian Emperor finishing third, fourth and fifth for Hong Kong. Geoglyph came home a creditable sixth but fellow Japanese raiders Jack d’Or and Panthalassa were well held in seventh and tenth.

Shum’s previous career highlight came when his crack sprinter Little Bridge staged a daring hit-and-run raid on Royal Ascot’s G1 King’s Stand Stakes in 2012 but he is now looking forward to an assault on the Hong Kong history books that could involve a clash with California Spangle and Golden Sixty as part of an audacious Triple Crown bid.

However, Romantic Warrior has already done what very few horses in Hong Kong history have ever done, winning nine of his ten races since making a winning debut at Happy Valley in October, 2021, and Shum is certain his unusually professional temperament is a key factor.

“His confidence keeps increasing but ever since I saw him at the International Sale, he has been so professional and calm in everything he does,” he added. “It has been an amazing effort by my team and I think this must be the most memorable day of my career.”

A runaway win in one of the world’s great 2000m contests will always resonate on racing’s global stage but this one rang out in Hong Kong for several significant reasons.

First, it was a maiden HKIR success for 62-year-old Shum, who rode 24 winners as a homegrown rider between 1977 and 1983 then learned his trade as a trainer with the legendary Ivan Allan before being awarded a licence in his own right for the 2003/04 season.

Second, it provided a ringing endorsement for the Hong Kong International Sale – where the hammer came down at HK$4.8m when Romantic Warrior went through the ring in June 2021 – and for a vintage 2022 BMW Hong Kong Derby (2000m) that was dominated by today’s LONGINES Hong Kong Cup and LONGINES Hong Kong Mile heroes.

And, last but not least, Romantic Warrior’s commanding success left the HKJC’s Head of Handicapping, Race Planning and International Racing Nigel Gray pondering a provisional rating of 124, which would place him behind only world champion Baaeed as the best 2000m turf performer in the world.

But, on a day which generated crowd of  around 45,000 and a record HK$1.729 billion in wagering turnover the focus was more on the sense of joy of seeing a brilliant young horse in full flow as Hong Kong’s sports fans revelled in the first HKIR day with meaningful crowds since COVID struck. 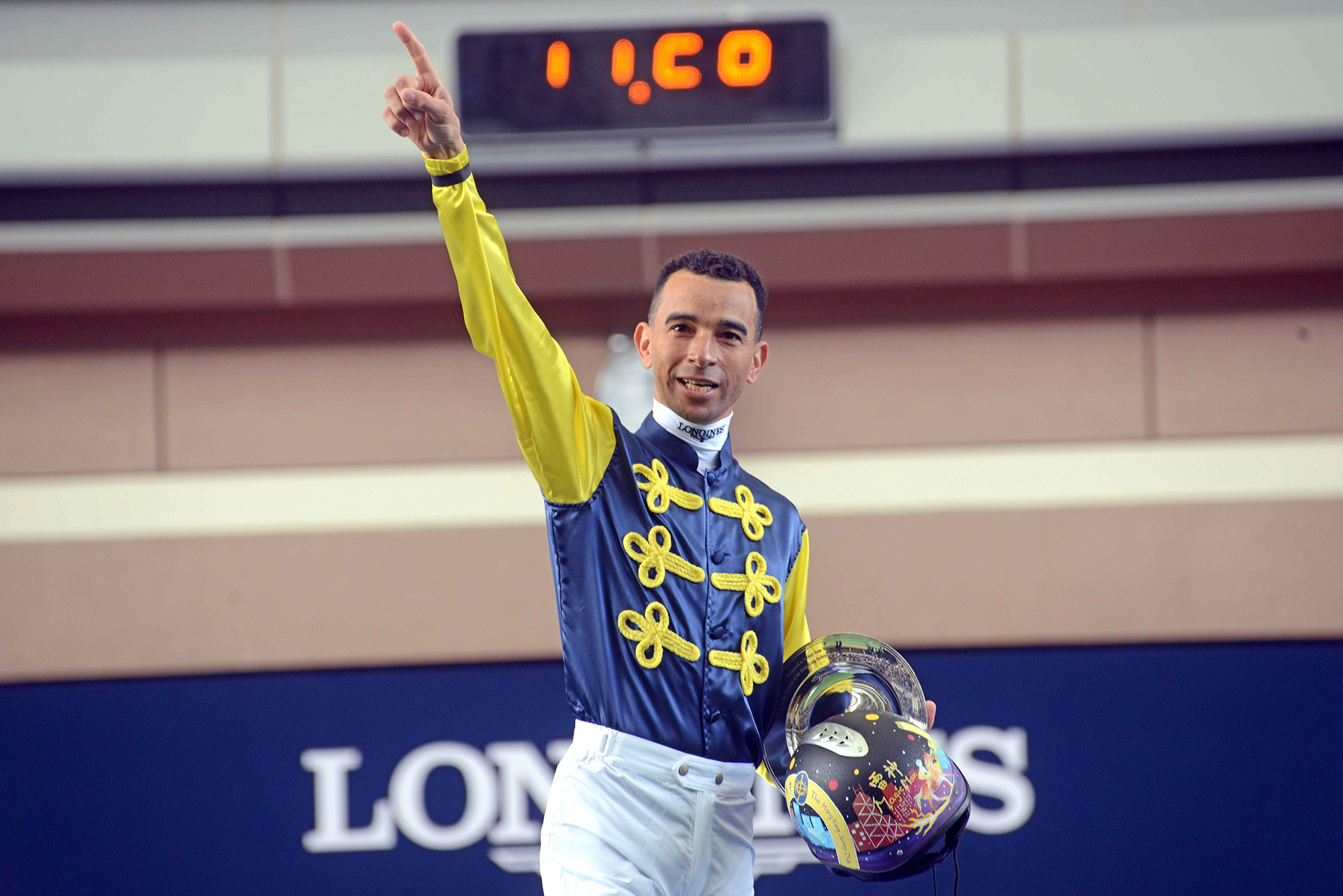 Joao Moreira is an all-time great of Hong Kong racing.

Joao Moreira’s final day in Hong Kong didn’t end in the way he wanted – with just a third and two seconds from his seven rides – but the four-time Hong Kong champion jockey was proud and humbled by the reception he received both at a packed pre-racing paddock presentation and throughout the day as a his many fans paid tribute.

“It wasn’t to be I’m afraid but I would just like to say thank you to the Jockey Club and all the people who have supported me as it has been an honour to ride here for so long,” he said.

Moreira came within a neck of victory in both the last two races, finishing second aboard Voyage Bubble behind Super Sunny Sing and occupying the same position in the finale when Beauty Live was wore down Blaze Warrior.